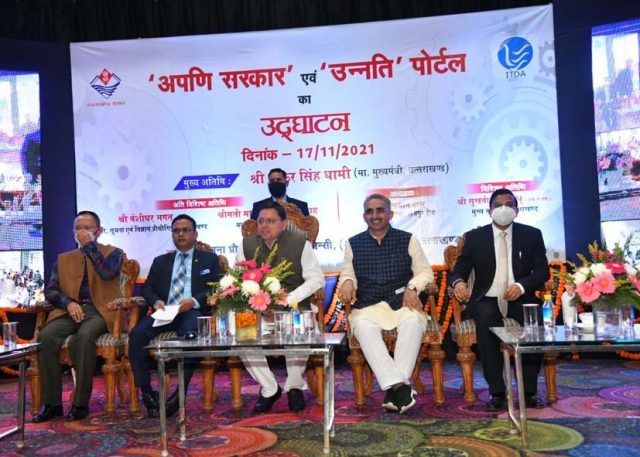 By Our Staff Reporter
Dehradun, 17 Nov: Chief Minister Pushkar Singh Dhami launched ‘Apni Sarkar’ and the ‘Unnati Portal’ at the IRDT Auditorium, here, today.
On the occasion, he also interacted with those who had applied for certificates online and took their suggestions. Through the portal, the CM will keep abreast of progress on various development schemes. A dashboard has been designed for the use of the Chief Secretary and the District Magistrates.
Dhami stated that the general public would obtain 75 services of nine government departments from the portal. These included caste, income, domicile and many other certificates. The people would receive these services at home and no longer have to make the rounds of government offices. This would save time and money. All these certificates would be transferred to people’s digi-lockers.
He praised Prime Minister Narendra Modi for the nation’s swift progress. The work culture in government had changed. Technology was being creatively and productively used. Schemes were being formulated keeping the last person in mind. Uttarakhand, too, was following his example.
Dhami declared that there is greater need for promoting connectivity, which is being done. He claimed that after becoming the ‘Mukhya Sevak’, he was working on the basic principles of ‘Sarlikaran, Samadhan, Nistarikaran and Santushti’.
One of the portal users, Kamla Rana, suggested on the occasion that camps be held in distant villages for quick distribution of certificates. Tehri’s Pranav Rana wanted the service to be publicised in the remote parts of the state. The Chief Minister also virtually interacted with Nisha of Pithoragarh and Upasana Singh of Haridwar.
Dehradun Mayor Sunil Uniyal ‘Gama’ said that this government initiative realised the dream of Pt Deen Dayal Upadhyaya’s Antyodaya concept.
Among those present were the CM’s Additional Principal Secretary Abhinav Kumar, Secretary, IT, RK Sudhanshu , Secretary Arvind Singh Hyanki, Special Secretary Parag Dhakatey, Director, ITDA, Ashish Kumar Srivastava, DM Dr R Rajesh Kumar, and virtually various MLAs and all DMs.