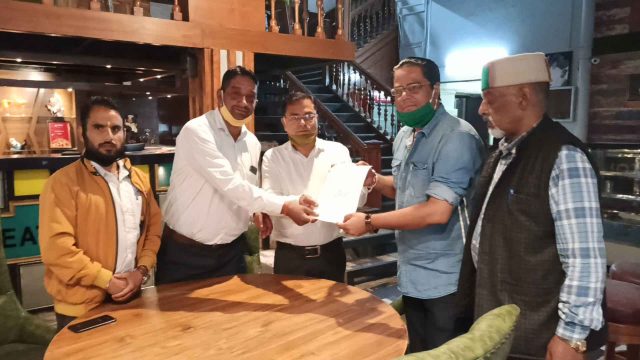 By Our Staff Reporter
Mussoorie, 30 Jul: Furor at a board meeting held on 27 July in the Mussoorie Municipal Council has taken a political turn. Regarding this, Congress councilor Darshan Rawat has complained to Mussoorie Congress President Gaurav Aggarwal about alleged indecent remarks made by Congress’s Aarti Aggarwal and demanded action for indiscipline. Complaints have also been made to the District Magistrate, Garhwal Commissioner and Municipal Chairman Anuj Gupta demanding action against Councilor Aarti Aggarwal.
Councilor Darshan Rawat said that, if his demand is not met within 15 days, he will sit on a dharna in the municipal board premises along with some councilors. If the Congress does not take action against Aarti Agarwal, he would resign from the party. Rawat said that there were always differences during board meetings but voiced with mutual respect, but Aarti Aggarwal had attacked him personally, which would not be tolerated. Councilors Nandlal Sonkar, Pratap Panwar, Kuldeep Rauchela also endorsed Darshan Rawat, saying that one should use decent language at meetings.
Mussoorie Congress President Gaurav Aggarwal said that there could have been a disagreement between the councilors on some issues. He would soon negotiate with both the councilors and try to resolve the matter. Councilor Aarti Aggarwal said that the allegations were baseless. It was Councilor Darshan Rawat who had made an indecent remark, which was countered by her.

Garhwal Post has established itself as a credible, balanced and forward looking newspaper in India. Based in Uttarakhand, the daily is read by the aware, socially and culturally responsible, high-income elite of society.
Contact us: info@garhwalpost.in
https://garhwalpost.in/free-website-to-find-friends/