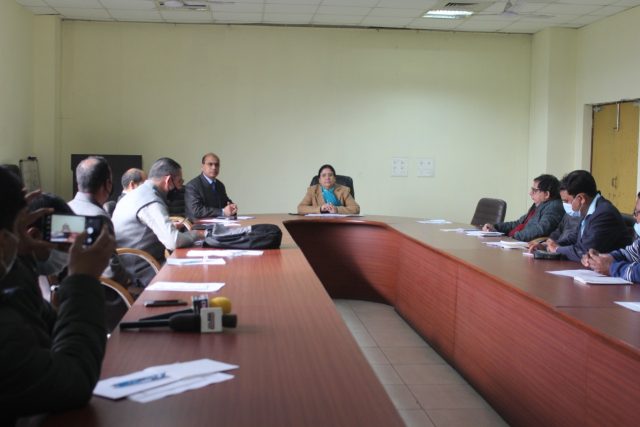 Dehradun, 13 Dec: Vice Chancellor of Doon University Professor Surekha Dangwal today informed media that the university would hold its second convocation on 15 December.
Addressing a press conference, today, she said that the University would try to make its convocation a regular feature so that at least PhD degree awardees could be physically conferred the degrees by the chief guest and the chancellor. She added that the University had its first convocation in 2018 and could not hold its second one due to Covid.
She further stated that 93 students in all, including those who topped their graduation, post-graduation and PhD degrees in various disciplines in the academic sessions 2017, 2018, 2019 and 2020 would be awarded Gold Medals on this occasion.
She said that the theme for this convocation was ‘The Empowered Woman’, given the title of Swayam Siddha, as it was dedicated towards empowerment of women. She claimed that the university had made serious efforts towards empowerment of women. She cited the example of Covid time restrictions and said that, even during this period, when the varsity was closed for most courses, PhD students were coming and therefore services of some women Self Help Groups were taken to make the cafeteria functional and thus also helped women requiring it. In addition, the university also ran some short term training courses for girl students in subjects like data analysis to make them more employable.
Professor Dangwal added that Governor Lt Gen Gurmit Singh (Retd), who was also the Chancellor of the Varsity, would preside over the convocation. Chief Minister Pushkar Singh Dhami and Higher Education Minister Dr Dhan Singh had also agreed to be guests at the ceremony and would also address the students on this occasion. In addition, Mata Mangala of Hans Foundation and Mahant Devendra Das would be honoured with the DLitt (Doctor of Letters).
She added that a total of 1269 students would be awarded Graduate Degrees, 802 students would be awarded Post-Graduate Degrees and 29 research scholars would be awarded PhDs. Two students would also be awarded MPhil Degrees in Economics, a course that had now been discontinued for unavoidable reasons. In all, 2102 students would be awarded degrees.
She disclosed that all the Research Scholars whose Viva Voce had been conducted till 30 November, 2021, would be awarded MPhil and PhD Degrees at this convocation.
The Vice Chancellor added that some new schools (departments) had been added recently which included a UG course in Psychology and UG, PG Courses in Biological Sciences. She said that these subjects had a great demand and even many highly meritorious students preferred to join these courses at the university instead of going to Delhi University. The School of Languages and those of other subjects had also seen good placements from the campus.
Registrar MS Mandarwal said that all the students who had been registered for participation in the Convocation processions would have to compulsorily participate in the dress rehearsal which would be held tomorrow. He further stated that the Convocation ceremony would be conducted in Hybrid Mode for the benefit of those students who live outside Dehradun.
The Press Conference was attended by the Finance Officer, Sunil Kumar Raturi, Dean, Students’ Welfare, Prof HC Purohit, Prof RP Mamgain, Prof Chetna Pokhriyal, Prof Harsh Dobhal, Dr Arun Kumar and Dr Rajesh Bhatt.