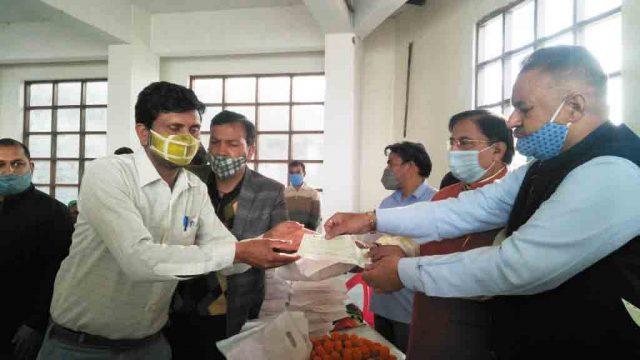 By Our Staff Reporter
Mussoorie, 13 Nov: Fifty-nine poor families, who were displaced from the Shifan Court because of the ambitious Purukul Mussoorie ropeway scheme, were given relief Rs 21,000, each, from the Chief Minister’s Relief Fund, here, today. On this occasion, MLA Ganesh Joshi said that if the municipality makes available the land needed for their rehabilitation, soon, then accommodation would be provided for these families.
A total amount of Rs 12 lakh 39 thousand was provided to the displaced families. Rajya Sabha MP Naresh Bansal and MLA Ganesh Joshi distributed the relief money on the occasion.
MP Naresh Bansal said that MLA Ganesh Joshi is always selflessly involved in the service of the people of his area. Due to his untiring efforts, the Chief Minister had agreed to provide the relief.
He said that the BJP government of the state is sensitive to the needs of the poor and committed totally to their wellbeing. It is working to realise the slogan of ‘Sabka Saath, Sabka Vikas, Sabka Vishwas’. It is totally committed to honest functioning.
He categorically denied allegations of corruption. He declared that after Bihar, BJP would unfurl the flag of victory in Bengal and, in 2022, BJP would retain power in Uttarakhand.
MLA Ganesh Joshi said that he had himself seen poverty and understood the pain of the poor families of Shifan Court who are having to spend their nights in the open air. After persistent efforts by him, the Chief Minister had released the relief money. People who had been left out would also be given relief soon.
He promised that, as soon as land is made available, the poor of Shifan Court would be provided houses. The event was conducted by Kushal Rana, General Secretary of Mussoorie BJP. Present were former Municipal Chairman OP Uniyal, SDM Manish Kumar, BJP Mussoorie President Mohan Petwal, Dhanprakash Agarwal, Vice President Mukesh Lal, Meera Suriyal, Gambhir Panwar, Pramila Panwar, Naresh Anand, Cantonment Councilor Ramesh Kannaujia, Pushpa Padiyar, councilor Arvind and a large number of BJP workers.
Rajya Sabha MP Naresh Bansal and MLA Ganesh Joshi, on reaching Mussoorie, distributed lamps to the poor and wished everyone a happy Diwali.

Garhwal Post has established itself as a credible, balanced and forward looking newspaper in India. Based in Uttarakhand, the daily is read by the aware, socially and culturally responsible, high-income elite of society.
Contact us: info@garhwalpost.in
https://garhwalpost.in/speed-dating-melbourne-over-50/