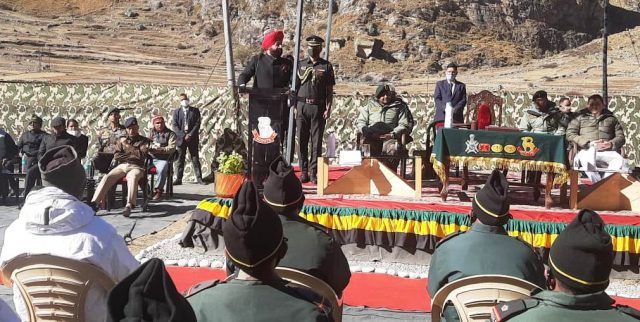 Dehradun, 5 Nov: Governor Lt Gen Gurmit Singh (Retd) and Chief Minister Pushkar Singh Dhami celebrated Diwali with soldiers at the border.
The Governor and the Chief Minister reached East Camp of the Garhwal Scouts in Mana on Diwali and boosted the morale of the Army personnel. The Governor distributed sweets and wished the soldiers a very happy Diwali. He said that everybody was proud of the patriotic zeal of the nation’s soldiers posted on the borders in difficult circumstances. On reaching East Camp, Mana, the Governor and the Chief Minister were welcomed by the army personnel with a guard of honour.
The Governor while praising the soldiers said that, today, the whole world is aware of the courage of the Army.
After meeting the army personnel, the Governor and Chief Minister reached the Badrinath Temple and offered prayers to the Deity for the prosperity of the country and the state.
The Chief Minister said, “It was my dream to celebrate Diwali with the soldiers of the Army. I am overwhelmed to be among you today.”
Badrinath MLA Mahendra Prasad Bhatt, District Magistrate Himanshi Khurana, Superintendent of Police Yashwant Singh Chauhan, SDM Kumkum Joshi and other officials were present during the visit.