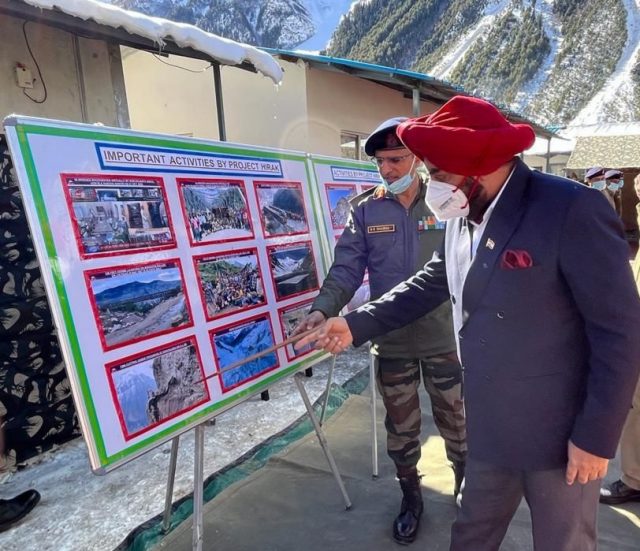 PITHORAGARH, 1 Jan: Governor Lieutenant General Gurmit Singh (Retd) reached Gunji, the last village on the Indo-Nepal-China border in Pithoragarh district, on the occasion of the New Year on Saturday. The Governor met the Jawans of Border Roads Organization (BRO), Army and SSB there and wished them Happy New Year. The Governor inquired about the well being of the soldiers and encouraged them. The Governor added that because of the soldiers the country is safe. He said that the construction of roads by the soldiers of the Road Border Organization in such extreme conditions and high mountainous places is really a challenging task. Construction of roads in marginal areas will prevent migration and encourage reverse migration. The construction of roads in the marginal areas and the residences of the local population are very important from the strategic point of view. Lt-General Singh (Retd) also discussed with the soldiers about their problems and challenges. The soldiers requested the Governor to start a school in Gunji. The Governor assured the soldiers that a school would be opened in Gunji very soon. On this occasion, the Governor distributed jackets to 300 jawans. The people of Gunji and Nabi villages also came to meet the Governor. He also met the soldiers of the army in Dharchula and inquired about their well being. In Dharchula, the local people invited him to visit Dharchula as their special guest.