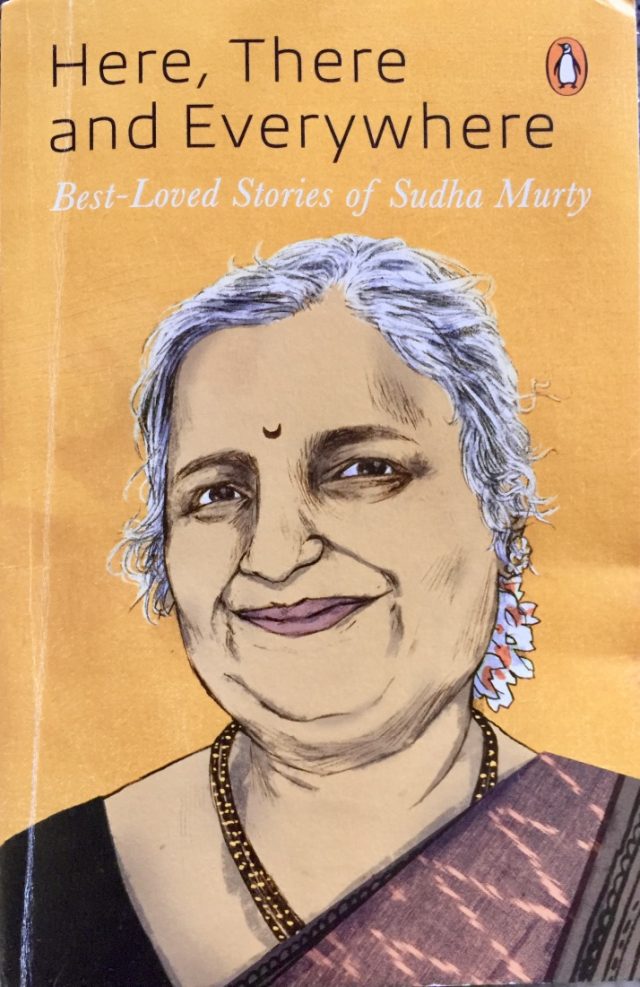 There are a few books that intimidate the seasoned reviewer. Foremost among them is the author’s resume, especially when it includes twenty-nine publications that include books, novels, non-fiction, fiction, children’s books, travelogues and technical books. And if you thought that wasn’t enough, a few have been translated into twenty languages and one Braille system. 26 million copies of her books sold, of which 1.5 million are in English alone. Now who an argue with that. Who said: ‘Nothing succeeds like success.’ And in this case, nothing exceeds like excess. Once again, it’d be foolhardy to argue with that.
Backing this up are more than a clutch of awards, honorary doctorates and here comes her two hundredth title, Sudha Murthy’s Here, There and Everywhere. They are touted before her fans as a collection of her best-loved stories or perhaps you could call it a nosegay of memories. Modestly, the author admits that she is unable to ‘spin words like books from the West or by some Indian writers in English.’ Mercifully, seventy years after our colonizers left for the shores of Old Blighty, English no longer remains the preserve of the ‘Koi-hai? their ‘Chota-hazari’. There remain pockets of the brown sahib variety where how you hold your fork-and-knife was more important than what you were shoveling into your mouth. The good news is that the once-upon-a-time days are over. English has seeped through the crevices and worked its way into the homes of common people. It’s been churned around and a new Hinglish has emerged the victor. Here you will find it gently, blessed and aided by Saraswati, the Goddess of Knowledge, Learning and Writing. And the author brings to her readers a bunch of stories straight from her heart. I guess that is exactly what accounts for her popularity as an eminently readable writer. As you read her work, you get the feeling that you are staring into the crystal clear waters of a mountain stream, where without artifice or craft, you can see deep, deep down almost to the rounded boulders that lie strewn on the river-bed.
Take for instance, In India, the Worst of Both Worlds. It is the familial tale of a son who abandons his aged father as a nameless destitute in an old people’s home. Pathos comes to the fore when the old man passes away. When his tattered bag is opened, out falls a bank passbook. To the very son who had betrayed him in his hour of need, the man has bequeathed everything. As the Frenchman, Jean Paul Sartre tells us: ‘When they opened the Devil’s purse, they found nothing except dead leaves.’
Of course there’s more than dead leaves here and all is not so dark. After all, there are two whole new stories in a packaging of twenty-two. Among the many fiddles of the New Age, I’m especially uneasy with this millennium’s marketing of repackaged old stories. It leaves the seasoned reader cold. There’s little else can you say about. In any other field, this would be labelled as fraudulent marketing. Many a time, like a child at a Baker’s window, I flattened my nose against the glass to find that chocolates are, at the end of the day: chocolates. Sell them, if you will, as ‘plain, nuts, caramel, roasted almonds or dairy milk’ but your atypical regular reader has ends up paying twice over for the same stuff. So welcome to the world of shadows and mirrors, where you read stories that you have already read and pretend that you are fresh at the batting crease.
Of course its an old wine in new bottles strategy that does wonders in boosting the sales graph for publishing houses but leaves the customer feeling diddled. All you have to do is to reshuffle a few stories, throw in a new story or two, give it a brand new title, paste on a new cover and put them back on the stand as new. Hey presto! You’ve just dealt a new hand – well almost! What, in essence you’ve done is add to the list of publications by an author while at the same time short-changing the old faithful book buyer. Should you be the type that likes cold statistics or plain figures, the strike rate in this instance is approximately nine per cent for what is touted as a ‘two hundredth book.’

Garhwal Post has established itself as a credible, balanced and forward looking newspaper in India. Based in Uttarakhand, the daily is read by the aware, socially and culturally responsible, high-income elite of society.
Contact us: info@garhwalpost.in
psyche love https://garhwalpost.in/flirt-memphis/ bi guys dating apps