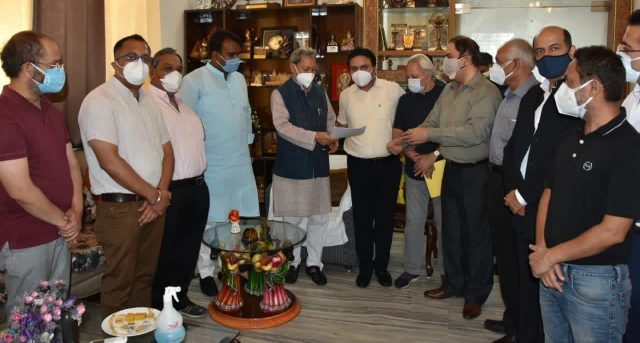 Dehradun, 12 Jun: A delegation of Doon Valley Hotel & Restaurant Association today called on Chief Minister Tirath Singh Rawat and demanded additional relief to the hospitality industry which had suffered most due to Covid restrictions. The delegation was led by office bearers of the Association and included Manu Kochhar and Mohamad Ilyas. A memorandum of demands was also submitted to the Chief Minister by the Association.

The Association pointed out that due to the on going Pandemic the hospitality sector was the worst hit, with nil business the employers were not even able to afford the staff’s salaries. Hotels, restaurants and bars were shut but their overhead expenditures were still running. The Association had in particular objected to some government departments raising bills and taxes on the hospitality units in spite of the industry’s on going woes.

The Association further pointed out that House tax had been revised manifolds with even the open lands taken into consideration for calculation of tax. If this was implemented under the present conditions, industry would have no choice than to shut shop and retrench employees. The Association demanded that any such raise be put off for at least 3 years giving the industry time to get back on its feet and recover its losses.

The association also stated that the hospitality units located in the hills had seasonal business with which they survived the rest of the year. The peak summer season had been disturbed since 2020 with negligible business. It demanded that the Minimum Consumption Guarantee charged on electricity be waived and charges be levied on actual usage. It further demanded that the proposed increase in Electricity charges also be deferred for at least one year.

Pointing out that relief on Bar Licence Fee was pending since last year despite assurances at different levels. This year again the hotels had not been able to operate their Bars. The Association demanded that the fee for the year 20-21 be reduced to 50% as assured earlier and for 21-22 the fee be charged pro rata for the months and days that the bars could do business.