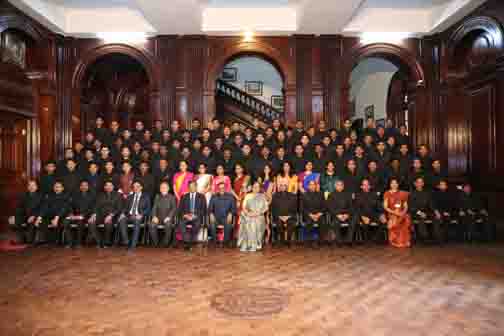 Dehradun, 30 Apr: The Annual Convocation of the 2017-19 Course of IFS Probationers passing out of the Indira Gandhi National Forest Academy was organised in the Convocation Hall of the Forest Research Institute, here, today. Governor Baby Rani Maurya was the Chief Guest on the occasion.
Omkar Singh, Director, Indira Gandhi National Forest Academy, informed the gathering that this institution, earlier the Indian Forest College and, now, the Indira Gandhi National Forest Academy had served the country for the last 79 years. All the Indian Forest Service officers in independent India and around 350 forest officers from 14 of neighbouring countries had been trained in this institution. A total of 64 IFS Probationers and 2 Foreign Trainees from Bhutan were to receive the diploma. There were 8 women probationers in the batch. All those who had successfully completed the training were being awarded the Associate of Indira Gandhi National Forest Academy Diploma.
At the ceremony, the officers who had shown outstanding achievements were awarded various prizes and awards.
Jagtap Kiran Suresh of Maharashtra cadre was the topper of the course.
Governor Baby Rani Maurya congratulated the officer trainees and noted that the training imparted at the IGNFA prepared the officers for the tough challenges that lay ahead. She asked them to strike a balance between conservation and development as both are equally important for humanity. While expressing satisfaction at the increasing forest cover in India, she emphasised that the officers ought to come up with innovative ideas to enhance the additional carbon sink to mitigate the climate change impacts as per India’s commitment at the international fora. The key was to develop sustainable utilisation of natural resources which could effectively be achieved by placing common people at the centre of the development process. She stressed that as young professionals, the officers should keep in mind that the decisions to be taken by them would have far-reaching consequences. She expressed confidence that the high standards of professionalism of forest officers would be maintained and further enhanced by them.
Saibal Das Gupta, Additional Director General of Forests, MoEF&CC, Government of India, congratulated the budding officers over successful completion of their professional forestry training at IGNFA. He said that the days when forests were treated as mere timber resources were over and now the focus was on harnessing the ecological benefits arise out of it.
Siddhanta Das, Director General of Forests & Special Secretary, MoEF&CC, Government of India, also congratulated the young officers and emphasized that a long and challenging career awaited them. He emphasised that the large population of the country was heavily dependent upon the forests for its livelihood and sustenance. There was need not only to conserve biodiversity for posterity but also to use it in a sustainable way for economic uplift of the people.
The Convocation ceremony was attended by a large number of senior officers from the Central and State Governments, besides the family members of the officers who passed out today.