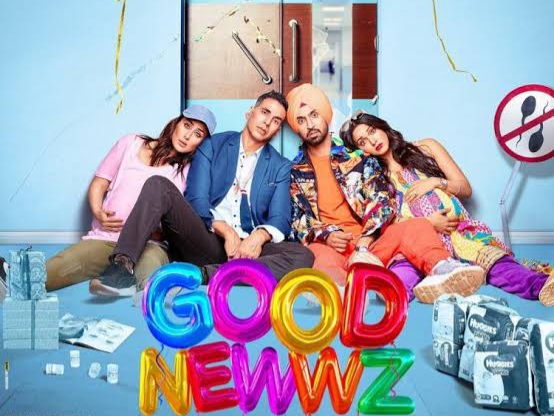 Films are a highly accessible social art form; through audio- visual media, a story teller always manages to have a strong impact on the society. The influence of films has been found to be greater than newspaper and books. Good and bad media – both work appropriately in moulding viewpoints. Cinema has grown to become such a pre-eminent part of human culture and the audience subconsciously grabs its profound aspects. For the last few years, Bollywood is set to create a buzz by picking up taboo topics. If Pink reiterates the point that when a woman says, ‘No’, it’s a ‘No!’, then Toilet dwells into the hazards of open defecation. Vicky Donor dealt with sperm donation theme; female sexuality was spotlighted in Lipstick Under My Burka; erectile dysfunction in Shubh Mangal Savdhan; middle age pregnancy in Badhai Ho; woman’s menstrual cycle and the use of sanitary napkins explored in Padman; and now a serious topic like IVF (In Vitro Fertility) is explored in Good Newwz. The industry is truly going through a breezy metamorphosis! Two couples go for IVF to the best fertility centre run by Tisca Chopra and Adil Hussain and wait eagerly for the good news. The good news, when it finally arrives, is a mere disaster. An error because of common sir-names leads to sperm-mix in the centre, thus creating more chaos than joy in the lives of the two pairs of Batras. Deepti (Kareena Kapoor) and her husband Varun Batra (Akshay Kumar), a high end couple, come face to face on this issue with Honey (Diljit Dosanjh) and Monika (Kiara Advani), a wealthy loud Punjabi couple who love wearing funny clothes. On one hand there is a huge conflict in their lifestyle and sensibilities and on the other is the issue of accepting the bitter fact to bear, deliver, and raise a kid whose biological father is someone else. How the couples handle this offbeat situation is what Raj Mehta’s directed film Good Newwz ponders over. The wives are still cool in this turbulent situation but one of the husbands is more concerned about his own child, while the other has no feelings at all. Deepti-Varun have a blustery relationship while the other Batras are happy-go-lucky in all situations. The film mostly sticks to its comedy genre giving so many amusing moments while overlooking many serious issues this theme embeds. Many complicated things have been explained in light-hearted vein. IVF is a boon but not an easy option. What a woman undergoes while going through this procedure has not been touched at all except for showing Kareena facing a hot flush at work and a one-minute impressive lecture on child bearing to let her careless husband know what a woman goes through. It also indirectly sends the message across to all men how a woman, the blessed one to give life to another being, needs to be treated during her bodily trying phases and how it impacts her fertility. Kareena emerges the best performer who carries her sophisticated mannerism and conduct point blank. Akshay is good as always with his superb comic timing. Diljit as the carefree sardarji is a pleasure to watch. His fervour is infectious. Kiara supports adequately with her simplicity and earnestness. Tisca and Adil maintain balance between light and serious moments. Good Newwz is a fun watch. It sways at places but its comedy keeps one hooked. It has enough jollity to sync with the holiday mood clubbed with superb acting by all and enlightening subject talk. The jocular sail of the two pairs amidst some unrealistic preaching nowhere disappoints in terms of entertainment. It is good to see that the topics that were never discussed openly in public now have found their way through films to connect with the audience in practical way with no obscene remark or vulgarity. Although Good Newwz merely scratches the surface but does sow a seed to serious thinking. Cinema has grown to become such a ubiquitous art and filmmakers are tapping its humongous potential to bring positive changes.