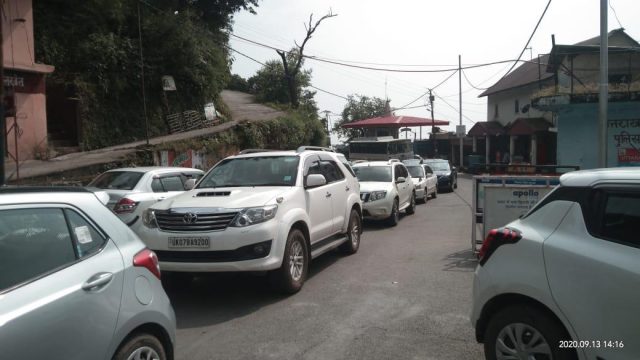 By OUR STAFF REPORTER
Mussoorie, 13 Sep: The Corona infection is increasing rapidly in Uttarakhand, due to which the government has made it mandatory for people coming from outside to get tested on the borders of the state if they do not have negative reports.
Despite this inconvenience, the influx of tourists here is constantly increasing. It is reported that many people have neither got corona tests done nor do they have a certificates of negative reports. As a result, the tourists are being sent back from Kolukhet by the Mussoorie Police. Because of this, there was a long queue of vehicles at Kolukhet, due to which people had to face much trouble.
Tourists coming to Mussoorie from different states said that the rules should be made known to all as they were being sent back just 13 kilometres away from Mussoorie. Owing to the traffic jam, the local people are also facing problems.
Local residents Balbir Singh and Roshan Kumar said that the corona infection is increasing rapidly in Uttarakhand, so even the slightest relaxation by the administration and police in Mussoorie could be harmful for the residents. It is also being alleged that people coming from other states are bringing fake No Covid Certificates. This needed to be investigated and strict action taken against them.
CO Mussoorie Narendra Pant said that a special force is monitoring the arrivals. The Nagar Palika is checking the authenticity of the certificates.