Principal Chand also welcomed the sports experts, the escorts and participants from various schools. The students of the school felicitated all the dignitaries with a welcome anthem. In his address, Principal Chand urged the participating girls to make successful Olympic players like Mirabai Chanu, Sania Nehwal, PV Sindhu, etc., their inspiration. He expressed the hope that, in future, these girls would bring glory to India by getting gold medals in the field of sports. To add colour to the event, the students gave a visual treat by highlighting the importance of sports and classical dance. National level football player of the school, Lakshmi Thapa administered the oath to all the participants. Chief Guest Brigadier Harish Garg affirmed that it is more important to participate than to be a winner. He appreciated the efforts being made by Kendriya Vidyalaya Sangathan for the all round development of the students. He motivated the players to take advantage of the benefits provided by the government by participating in ‘Khelo India’ and declared the meet open.In the three-day event, football matches will be held in the under-14, 17 girls’ category and basketball under 14, 17 girls’ category. In this divisional competition, 146 contestants from various Kendriya Vidyalayas are participating.On the first day, KV Indian Military Academy, Dehradun, defeated KV Upper Camp, Dehradun, 7-0, in the Under-17 girls’ football match and KV Birpur, Dehradun, defeated KV FRI, Dehradun, 2-1. KV Indian Military Academy, Dehradun, defeated KV Birpur, Dehradun, 2-0, in a match.In Basketball Under-17 Girls category, KV Indian Military Academy, defeated KV FRI with a score of 21-8. KV ITBP won the match against KV HBK No. 1 with a score of 26-8. KV FRI defeated KV Haldwani 1st shift by 17-3, KV Haldwani 2nd shift defeated KV Hathibadkala HBK No. 1 by 31-4. KV IMA defeated KV ITBP by 10-4 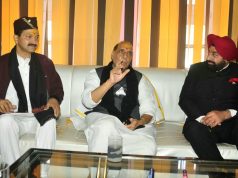