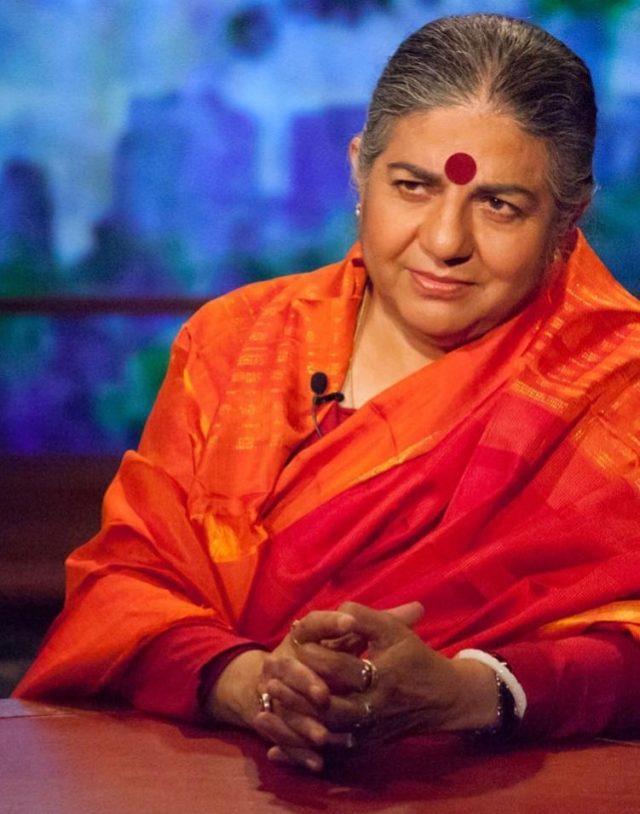 DEHRADUN, 27 Sep: Navdanya Trust, a leading NGO working in Dehradun has alleged that land mafia has been attempting to grab the land owned by Navdanya, and the private road owned by Navdanya, in connivance with the local Police and revenue officials. Speaking to Garhwal Post, Navdanya’s founder Dr Vandana Shiva alleged that maps as old as of the year 2009 clearly established that the road the land mafia was trying to grab was the private property of Navdanya Trust. A judgement in the Court case number 636 dated 16 March, 2009 had clearly established that the property in question was owned by Navdanya. However in view of some attempts to grab the land by some land mafia, Navdanya Trust according to Dr Shiva had again approached the court in January this year which again ruled in favour of Navdanya and restrained any other person or party from grabbing this road which was the property of Navdanya.

However, according to Dr Shiva, despite the court order, the land mafia arrived at the private road of Navdanya with the JCB machines on 20 July this year, and started to encroach on the land. This was promptly reported by Navdanya to the Police on 21 July and FIR was registered in this regard with the Police post in Naya Gaon Palio. On 1 August this year, Navdanya again approached the court to prevent the encroachment. However, the land mafia again arrived on 27 August with several JCB machines and some “goons” and started construction on the land belonging to Navdanya. The Court on 31 August passed an order staying any construction on the said land, copies of which were given by Navdanya to DM Dehradun, SSP Dehradun and local SDM, Tehsildar and local police officers for implementation.

Speaking to Garhwal Post, Dr Vandana Shiva alleged that despite the court’s stay, the local administration has not been cooperating with Navdanya towards strict implementation of the court order and construction activities by the land mafia continued without any intervention by the administration. She added that Navdanya was compelled to approach the court and file a contempt case in this regard on 12 September. On 13 September, the Court issued a direct order to SHO Patel Nagar asking him to stop the illegal construction and strictly implement the court order staying the construction.

According to Dr Shiva, some of the revenue officials have been claiming that this road fell in Khasra Number 1000 “Gha” but in reality, the land falls under Khasra 1000 “ka” and according to the revenue documents Khasra number 1000 “Gha” actually is Khala on which no construction can be allowed as it is government land.

Dr Shiva added that on 19 September, about 2,000 local farmers submitted an application to DM Dehradun where they admitted that the land belonged to Navdanya, but they have never been stopped from passing from the private road to access their own lands by the Navdanya Trust. They too asserted that Khasra number 1,000 “Gha” was actually a Khala and any construction on a khala is not permitted according to multiple orders of the Supreme Court and the High Court. The DM did take cognizance of the letter and directed the SDM to remove any construction on Khasra number 1000 ‘Gha’. However, on night of 24 September, the land mafia again entered Navdanya property and started its construction by dumping construction material there and also threatened the Navdanya staff.

Dr Shiva said that she had to meet the DM Dehradun Sonika, who directed the SDM and the Patwari to stop the illegal construction. Dr Shiva said that it was pathetic to observe that even the court orders were not being taken seriously and it appears that the law and order has collapsed in the state of Uttarakhand. She also informed that she has made it clear to administration that construction could not be permitted without proper measurement of the land and demarcating the same. She further informed that yesterday on the orders of the DM, the Tehsildar and the Patwari finally landed at the site and the land was measured and during the process of measurement they had to admit that the land belonged to Navdanya. She also informed that the Patwari’s report was yet to be submitted.

Meanwhile speaking to Garhwal Post, SDM Vikasnagar, Vinod Kumar admitted that he was aware of the case and the developments and claimed that private land and public land were adjacent to each other and therefore there could be some confusion with respect to ownership. However, he has directed the Tehsildar to visit the site along with the Patwari and get the land measured up, to clear the confusion. He further claimed that all construction activity has been stopped at the site.
Speaking to Garhwal Post, Tehsildar Chaman Singh admitted that the land has been measured and the report would soon be submitted to the SDM and further claimed that no construction activity was in progress at the site at present.