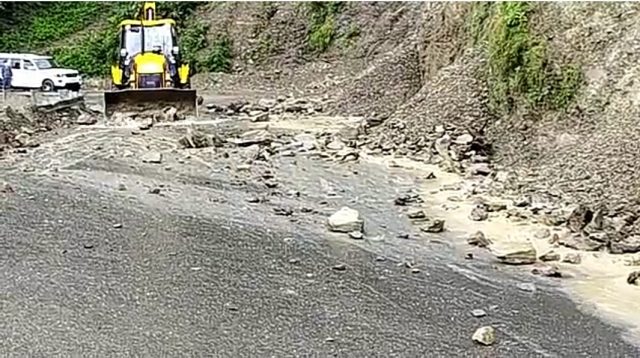 By Our Staff Reporter
Mussoorie, 21 Sep: After torrential rains here, the Mussoorie-Dehradun Road was blocked for an hour due to large stones and debris sliding down the hillside near the Galogi Power House, leading to a 3 kilometre long traffic jam.
People had to face a lot of problems due to the long queues of vehicles on both sides of the road. However, after about an hour, the road was cleared by the Public Works Department by removing the debris and stones with a JCB machine. However, stones and debris continue to come down, due to which the danger remains.
It may be recalled that Chief Minister Pushkar Singh Dhami, who recently visited Mussoorie along with officials of the Public Works Department and Cabinet Minister Ganesh Joshi, inspected the landslide area and the damaged hill. He instructed the officials of the Public Works Department to treat the damaged hill at the earliest. An estimated budget of Rs 4 crore has also been approved by the government. Officials of the Public Works Department said that treatment work on the mountain will be started after the rains and the paperwork is being completed. Due to being the only main road connecting Dehradun, there is always a fear of accidents here, due to which people are facing huge problems.

Garhwal Post has established itself as a credible, balanced and forward looking newspaper in India. Based in Uttarakhand, the daily is read by the aware, socially and culturally responsible, high-income elite of society.
Contact us: info@garhwalpost.in
https://garhwalpost.in/muslim-speed-dating-manchester/ https://garhwalpost.in/singles-in-victorville/ oasis dating