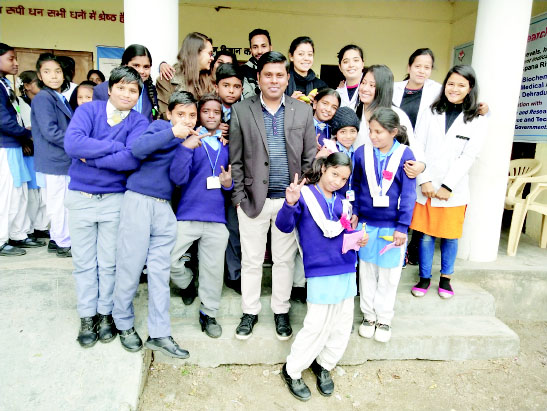 By OUR STAFF REPORTER
DEHRADUN, 31 Jan: A one day ‘Lead Toxicity and Awareness Programme’ was organised to create awareness in young children and school students residing nearby Rispana River, here. The awareness programme was organised by the National Referral Centre for Lead Projects in India (Uttarakhand Branch), Department of Biochemistry, Shri Guru Ram Rai Institute of Medical & Health Sciences, today, in collaboration with Uttarakhand Science Education and Research Centre (USERC), Department of Science and Technology, Government of Uttarakhand at SGRR Inter College, Mothrowla.
The main aim of the programme was to educate and make aware the young minds who reside near the Rispana River, about the adverse effects of lead. On this occasion, Dr Rajendra Rana, Organising Secretary, Scientist and Coordinator, USERC, spoke about the quality and toxicity of water and its adverse effect on children. Dr Rajeev Singh Kushwaha, Organising Secretary and Associate Professor, Department of Biochemistry, Shri Guru Ram Rai Institute of Medical & Health Sciences and Chief Project Investigator of this programme educated the young school students about lead and its adverse effect on human health and its prevention. He also spoke about the facilities available at Shri Mahant Indiresh Hospital for the assessment of lead. He also disclosed that at highest risk of lead poisoning are the children,
the very young (including fetuses) and the impoverished. Undernourished children are more susceptible to lead because their bodies absorb more lead if other nutrients such as calcium, Vitamin C are lacking. He said that there was no known safe blood lead level but it is known that, as lead exposure increases, the range and severity of symptoms and effects also increases. Even blood lead levels that are around 10 ug/dl, once thought to be a “safe level”, may lead to decreased intelligence in children, behavioral difficulties and learning problems. Higher blood lead levels can result in CNS effects, reduced IQ, impaired growth, harm to the kidneys and other organs, and compromise red blood cell development.
Prof KS Negi, Department of Community Medicine, SGRRIM&HS also spoke about the historical role of Lead and its disadvantages. Vijay Bhatt from USERC also spoke on this occasion. A large number of medical students and other participants assembled to create awareness among the general public. They distributed pamphlets appealing to the government agencies to stop adding lead to paints and other consumable product for safeguarding the future of children.
The Vote of Thanks was proposed by SP Kukreti, Principal, SGRR Inter College. Stage coordination was done by Priyam, Rohit Maurya and Akhil Anthwal. Also present were teachers and students of SGRR Inter College.

Garhwal Post has established itself as a credible, balanced and forward looking newspaper in India. Based in Uttarakhand, the daily is read by the aware, socially and culturally responsible, high-income elite of society.
Contact us: info@garhwalpost.in
https://garhwalpost.in/backpages-hookups/ https://garhwalpost.in/elite-dating/ gay bilatin men