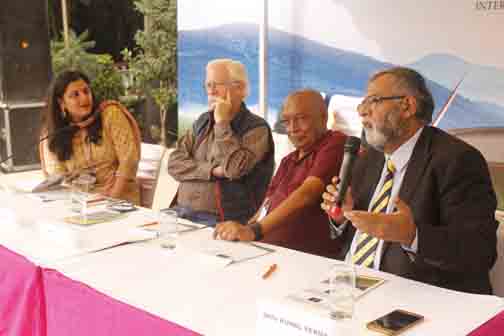 DEHRADUN, 15 Nov: On the opening day of the Third Valley of Words, the session, ‘Lens, Lines and Landscapes’, saw a packed house. It was moderated by renowned author- photographer Ganesh Saili. Young publisher Trisha Niyogi represented the changing face of new publishers in India. She said, ‘Authors-photographers are a rare breed that combines their craft of taking pictures with the written word. We have showcased some of their work that has been published in thirty odd books by Niyogi Books.’ Ganesh Saili set the tone by talking about the transition from analogue to digital, and his experience with young officer trainees at the LBSNAA. He said, ‘When we took to writing with light in the 1970s, it was a different world where you had to publish one in six pictures to survive! To get a camera, you had to be an accredited photographer, lenses were bought from the black market and films were mailed to the lab in Bombay for processing! Yup, we had to have a hit ratio of one to six!’ Taking up the thread of thought, photographer Shiv Kunal Verma spoke of the travails in shooting films from helicopters and aircraft in the Northeast to do his five volume magnum opus. He recalled, ‘As school kids, we were sent up to paint the ugly scars left by limestone quarriers on the Mussoorie hillside because Mrs Indira Gandhi was going to take an aerial survey of the havoc in the hills!’ Mussoorie-born author Stephen Alter spoke of the beauty of Arunachal and of the mountaineers whom he has written about in his seminal work, ‘The Wild Himalaya’. It is a book that will be used by authors of the future as a reference whenever they write about the many faceted aspects of the mighty ranges to the north. The session concluded with a vote of thanks to the Honorary Curator of the Festival, Sanjeev Chopra, who brought under one roof so many creative people.