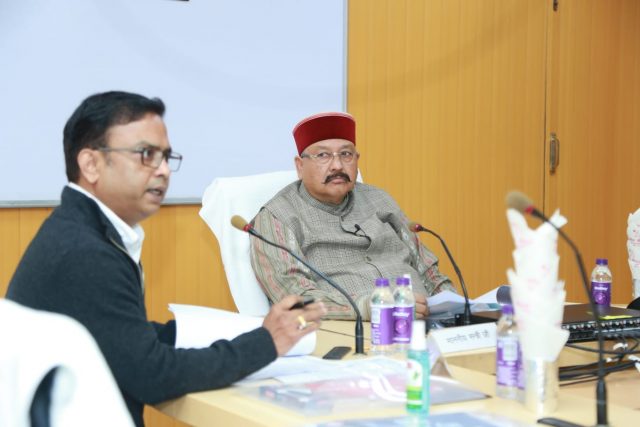 DEHRADUN, 29 Nov: State Public Works Minister Satpal Maharaj today held a review of Uttarakhand Public Works Department. The meeting was aimed at resolving problems of the engineers, Ministerial Association and Uttarakhand Diploma Engineer at the earliest. It may be recalled that Diploma Engineers have been sitting on a dharna in pursuance of their demands. Maharaj today made it a point to visit the Dharna site and assure the Diploma Engineers that their problems would be resolved at the earliest. He sought some time from them to get their problems resolved. The review meeting was held at the Office of the Chief Engineer Public Works Department office in Yamuna Colony today. Maharaj took cognisance of the pending problems of Uttarakhand Public Works Department Ministerial Association and Uttarakhand Diploma Engineers Association, and directed Principal Secretary PWD RK Sudhanshu to solve all the pending problems within 15 to 20 days. Meeting with the representatives of Uttarakhand Public Works Department, Ministerial Association, Uttarakhand Diploma Engineers Association and PWD officials, Public Works Minister Satpal Maharaj said that orders had also been given to conduct departmental examination for the confirmation of departmental junior engineer. He also said that the promotions to the posts of Executive Engineers and InCharge Assistant Engineers would be ensured against the vacant posts. He also informed that a proposal for departmental restructuring had been received by the government, on which action was being taken. The PWD Minister instructed the PWD secretary to shift the accident, seriously injured, disabled, seriously ill and engineers at the workplace to accessible places on the basis of requests received from them on compassionate grounds. He also noted that after promotion from junior engineer to the post of assistant engineers, some appointments had been made from remote and inaccessible places to remote and inaccessible places whereas some engineers had been promoted and transferred from Convenient locations to other convenient locations and ordered a review of the recent transfers and removal of the anomalies. After the meeting, Public Works Minister Satpal Maharaj, reached the spot outside the Office of the Chief Engineer Public Works Department office, where the diploma engineers were sitting on the Dharna. He sought some time from them to resolve their problems and asked the PWD Secretary to take due action in respect of the demands. He said that the problems of ministerial employees, the diploma engineers were being looked into by the government and would be resolved soon.