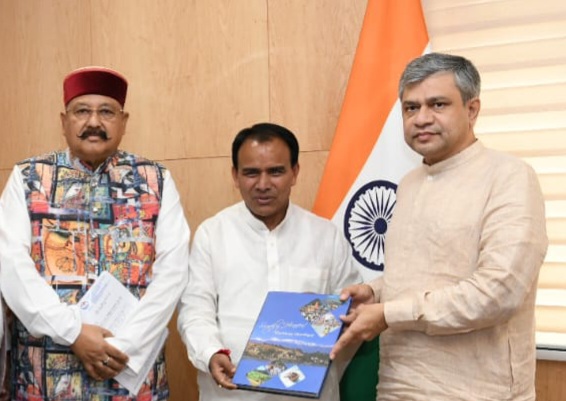 DEHRADUN, 28 Sept: Uttarakhand Cabinet Minister Satpal Maharaj met Union Railway Minister Ashwini Vaishnav regarding discrepancies in the payment of compensation for acquired land and resolving the problems being faced by the villagers during the construction of the Rishikesh-Karnprayag railway line.

He sought declaration of a rehabilitation package soon and recruiting the unemployed in the construction works of the railway project.

Maharaj, through a letter handed over to the Railway Minister, informed him that many families of villages near railway lines have left their homes for safety and have taken shelter elsewhere. To solve this problem, the Ministry of Railways should identify such villages and assess the damage and appropriate compensation (compensation) should be given to the affected families. Drawing the attention of the Railway Minister to the many discrepancies in the payment of compensation for the land acquired by the Railway Development Corporation for the construction of RishikeshKarnprayag railway line, he said that due to non-hearing of the grievances of affected people at any level, public anger is spreading. He suggested constituting a high level committee to resolve the problems and hearing the grievances of the affected people. He also requested the Railway Minister to develop Rishikesh-Karnprayag railway station at Yognagri from the point of view of tourism.

Garhwal Post has established itself as a credible, balanced and forward looking newspaper in India. Based in Uttarakhand, the daily is read by the aware, socially and culturally responsible, high-income elite of society.
Contact us: info@garhwalpost.in
when a man flirts sexy women dating site https://garhwalpost.in/meet-young-singles/