DEHRADUN, 12 DEC: Actor Mahie Gill’s nephew Adhiraj passed out of the portals of the Indian Military Academy today. Gill was eager to attend the Passing Out Parade today but she couldn’t due to the Covid pandemic. She is presently in Goa and missing to be here at the IMA on this very special occasion of their family. 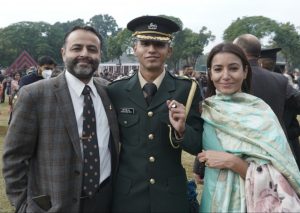 Adhiraj studied at The Asian School during his father Wing Commander Tejinder Singh Mattu’s posting at the Air Force Selection Board in Clement Town.

His mother Simrat, who is a homemaker, is elated on this occasion and said, ” It was a great moment when we put stars on our son’s shoulders. I am delighted that my son is all geared to serve the army and the nation.”

Father Wing Commander Tejinder Singh Mattu retired from the fighter stream in the IAF. After studying at the Asian School Dehradun from 2011 till 2016, Adhiraj joined NDA in Dec 2016. He  passed out from NDA on November 2019 and Joined IMA in January 2020. Zozila Company in Manekshaw Battalion. He is a good Lawn Tennis player and played school nationals and was  academy tennis team player both at NDA and IMA. He was a good crossing country runner and was in the first enclosure at both NDA and IMA. He held the appointment of Junior Under Officer of Zozila company in IMA. He was awarded a torch for excellence in academics in IMA. He is joining the 2nd battalion of The DOGRA Regiment.