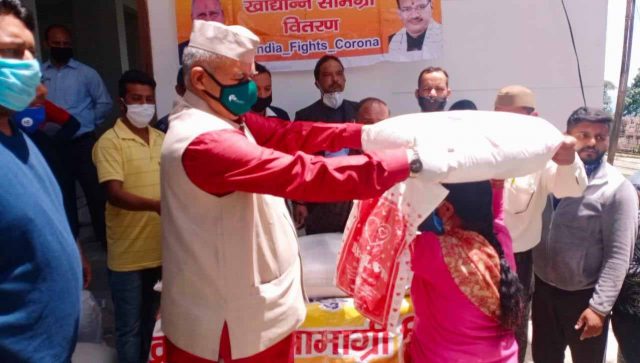 By OUR STAFF REPORTER
Mussoorie, 12 Jul: MLA Ganesh Joshi distributed 560 ration kits to small shopkeepers, rickshaw pullers, street vendors and other needy people of Mussoorie in collaboration with the founder of Hans Foundation, Mata Mangla, and Bhole Maharaj. MLA Joshi said that Mussoorie is based on tourism. There have been no tourists in Mussoorie during the Corona period. In such a situation, big and small traders of Mussoorie are in difficulty. The poor and needy were being helped in Mussoorie by giving rations and other goods from the very first day of the lockdown.
He expressed gratitude to Mata Mangla and Bhole Maharaj, who provided 1500 ration kits, which were distributed by him in his assembly constituency.
He added that, to improve the health facilities of Mussoorie, an ambulance and a hearse would also be provided. He attacked the Congress leaders and said that they were constantly making baseless statements against the BJP government and its leaders, even as they did not help the people in the Corona emergency. The people would teach them a lesson in the coming times.
He claimed that Chief Minister Trivendra Rawat was constantly working for the welfare of the state and several schemes had been launched to provide employment to the migrants.
Presenton this occasion were BJP Mussoorie President Mohan Petwal, Vice President Gambhir Panwar, Amit Bhatt, Kushal Rana, Ramesh Khanduri, Cantonment Vice President Badal Prakash, Chandrakala Sayana, Pushpa Padiyar, Namita Kumai, Abhilash Rana, Anil Singh, Sumit Bhandari, Sapna Sharma, Ajay Sodiyal, Sachin Kumar, Manoj Dhigia, Manoj Kumar, Kunal Kumar and many others.

Garhwal Post has established itself as a credible, balanced and forward looking newspaper in India. Based in Uttarakhand, the daily is read by the aware, socially and culturally responsible, high-income elite of society.
Contact us: info@garhwalpost.in
https://garhwalpost.in/appropriate-age-gap-in-relationships/ dating as a single mom