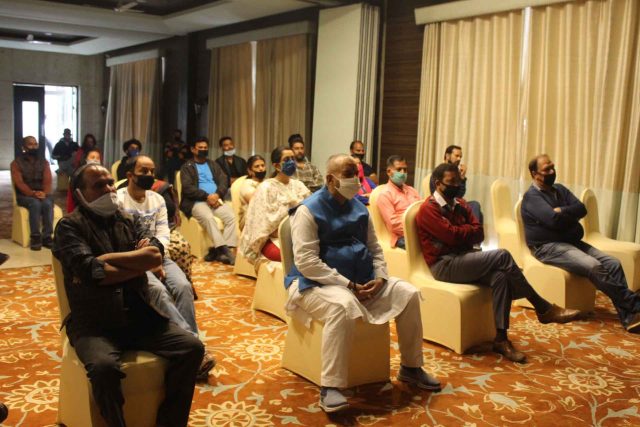 MUSSOORIE, 15 Jun: Mussoorie BJP workers, under the leadership of Mussoorie MLA Ganesh Joshi, heard Defence Minister Rajnath Singh’s virtual address at an event organised at a local hotel today.
MLA Ganesh Joshi said that the Modi Government at the centre was continuously working in the interest of the country. During the last one year, many historic decisions had been taken in the country’s interest. He noted that the Union Defence Minister had praised the work being done by the Trivendra Singh Rawat Government in the state. The state government had done historical work against corruption and put many corrupt people in jail. He said that the government was working to bring migrants home provide and self-employment to them. He claimed that 85 percent of the promises made by the BJP to the people during election 2017 were fulfilled.
Present on the occasion were Mussoorie BJP President Mohan Petwal, Kushal Rana, Meera Suriyal, Amit Bhat, Narendra Padiyar, Ramesh Khanduri, Anil Singh, Gambhir Panwar, Sapna Sarma and many others.

Garhwal Post has established itself as a credible, balanced and forward looking newspaper in India. Based in Uttarakhand, the daily is read by the aware, socially and culturally responsible, high-income elite of society.
Contact us: info@garhwalpost.in
https://garhwalpost.in/dating-sites-charleston-wv/