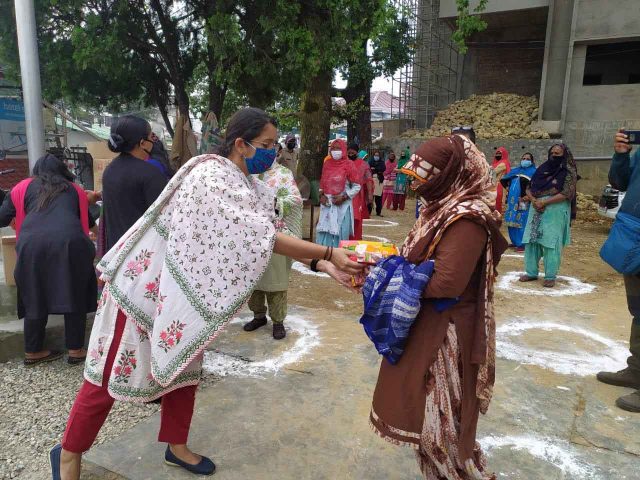 MUSSOORIE, 15 Jun: BJP’s national co-media in-charge Neha Joshi distributed sanitary pads to female sanitation workers of the municipality and provided information on how to avoid corona infection. Talking to reporters, she said that the Uttarakhand Government working under Chief Minister Trivendra Rawat was continuously working for the development of the state.
She alleged that the governments of Delhi and Maharashtra failed to deal with the corona infection. People there are troubled due to lack of health facilities. Death rate is increasing continuously. In contrast, the Uttarakhand Government had made special arrangements to deal with the corona infection. Corona infected patients are recovering rapidly due to better health facilities in the state, the death rate was also negligible. She said that the Union Minister Rajnath Singh praised the work being done by the Chief Minister and his government.
She also hit out at the opposition and said the Maharashtra Government is running with the support of the Congress, in such a situation, the Congress is also responsible for the worsening situation in Maharashtra. Neha Joshi said that due to the wrong policies of the Delhi Government, the entire state had come under the grip of the Corona virus. Health services in Delhi had gone from bad to worse, due to which the death ratio from Corona is increasing rapidly. There is no place for cremation of people.
Present on the occasion were BJP Mahila Morcha President Meera Suriyal, Sushma Rawat, Sapna Sharma and many others.

Garhwal Post has established itself as a credible, balanced and forward looking newspaper in India. Based in Uttarakhand, the daily is read by the aware, socially and culturally responsible, high-income elite of society.
Contact us: info@garhwalpost.in
polish single ladies