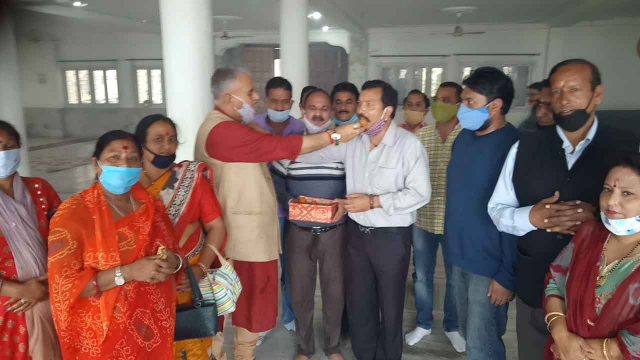 By Our Staff Reporter
Mussoorie, 9 Aug: Party workers celebrated the birthday of Uttarakhand BJP State President Banshidhar Bhagat under the leadership of Mussoorie MLA Ganesh Joshi, here, today.
On this occasion, special recitation and havan was organized at Radha Krishna temple in Mussoorie, in which all people wished long life of Banshidhar Bhagat. Workers celebrated Bhagat’s birthday by distributing sweets.
In Bhatta village, underprivileged people were distributed ration and planted pomegranate and other fruitbearing trees were planted.
MLA Ganesh Joshi said that Bansidhar Bhagat was a great leader, who had also been an MLA many times. Bhagat worked to strengthen the party and the government, as he is the bridge between the two. This had strengthened the state and the party. He expressed confidence that under the leadership of Bhagat, the BJP would form a government with absolute majority in the next election.
Present on the occasion were BJP Mussoorie President Mohan Petwal, General Secretary Kushal Rana, Gambhir Panwar, Virender Rana, Meera Suriyal, Sapna Sharma, Anil Singh, Abhilash Rana, Kunal, BJP Yuva Morcha President Rakesh Rawat, Anita Saxena and many others.

Garhwal Post has established itself as a credible, balanced and forward looking newspaper in India. Based in Uttarakhand, the daily is read by the aware, socially and culturally responsible, high-income elite of society.
Contact us: info@garhwalpost.in
gay hook up vancouver mature kent dating mature asian dating