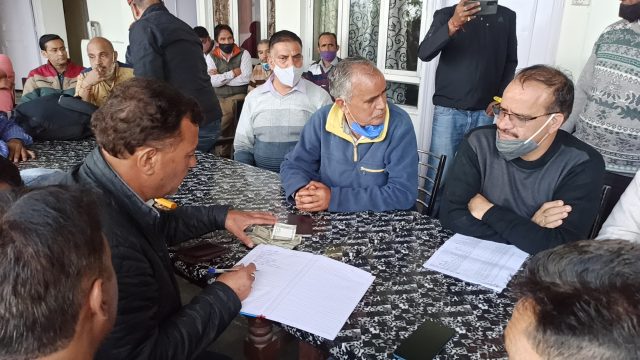 By Our Staff Reporter
Mussoorie, 29 Sep: Surendra Singh Rana has been elected President of the Mussoorie Lease and Rent Association, while Devi Godiyal will be General Secretary, and Nagendra Uniyal, Treasurer.
A meeting was organised, today, by the Mussoorie Lease and Rent Association in the auditorium of a local hotel. President Rana said that the purpose of the Association is to protect the rights of the people who have leased and rented municipal property. Shops, houses and parks in Mussoorie have been given on rent and lease to people for many years, but the talk of relooking at tenancy again in a new way is being heard and causing worry to the people. The Mussoorie Lease and Rent Association has been formed in this regard. As per the rules, the rent has to be increased only every 5 years, but now there is talk of renewing the lease and tenancy. The association would oppose this move.
Surendra Singh Rana was unanimously elected as President at the meeting, Chandi Prasad Saklani as Vice President, Devi Godiyal as General Secretary, Nagendra Uniyal as Treasurer, while former members Kedar Singh Chauhan, RP Badoni, Virendra Singh Rawat, Anand Pawar and Neeraj Aggarwal were made patrons.