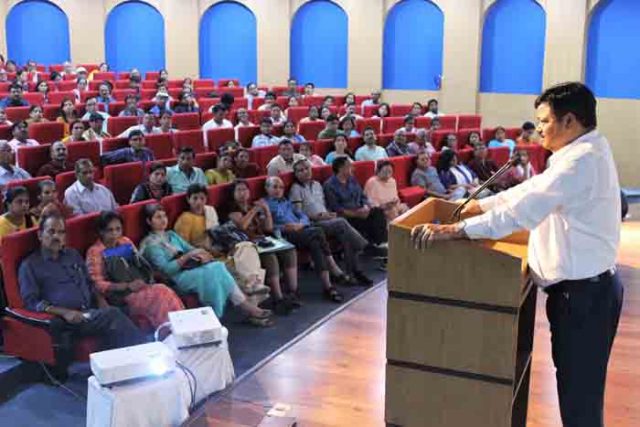 Dehradun, 22 Jul: “Graphic Era believes in the overall grooming of the students,’ said President, Graphic Era Group, Dr Kamal Ghanshala, here, today. “It is not just about imparting education.” Dr Ghanshala was addressing the parents and guardians of BTech first year students. He mentioned that Graphic Era was not only known for its placements but also for the benchmarks established and achievements of its students.
He disclosed that this year’s highest package for BTech (CS) was grabbed by Ujjwal Kumar which amounted to Rs 55 lakh from SNS Designs. Before this, Shubhi Muniyal student of BTech(CS) grabbed an annual package of Rs 40.67 lakhs by the American multinational company, Adobe.
He added that 9 of the 10 member team which is preparing the MHRD portal were students of Graphic Era University. Graphic Era was also planning to preserve the Laxman Jhula in Rishikesh through retrofitting.
He also mentioned Rajat Jain, a student the University who made the smallest and cheapest ECG machine and got his name registered in the top 20 start-ups of the nation. Graphic Era encouraged its students to be inventive and establish startups. He also mentioned Abhilash Semwal, who invented a bomb detector. He would develop for the state transport corporation a device that would prevent intoxicated people from driving vehicles. He claimed that Graphic Era did not only transform dreams of its students into reality, but also did the same for their parents.