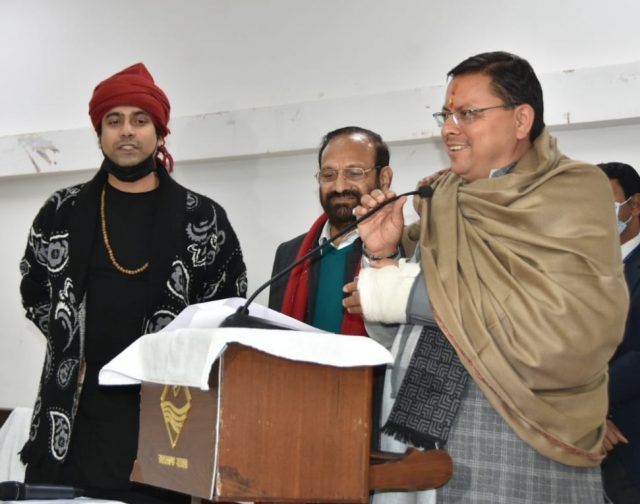 DEHRADUN, 28 Dec: A large number of youths and students of Jaunsar Bawar area called on Chief Minister Pushkar Singh Dhami at his official residence on Monday under the leadership of leading Bollywood singer Jubin Nautiyal and his father, Ramsharan Nautiyal. They thanked the Chief Minister for providing Rs 2 crores to the Town Planning Department for developing the new Chakrata Township. The Chief Minister said the new Chakrata Township would be developed from PuroriNagthat-Lakhwar to Yamuna River. For this, an amount of Rs 2 crore had been announced in the past to be released to the Town Planning Department. The Chief Minister said that the “New Chakrata Township” would be developed on the land adjoining the Chakrata-Mussoorie Highway to preserve the traditional identity and cultural heritage of the villages around the township. He added that the boundaries of the township would be kept separated from the populated area of these villages, so that the traditional culture and traditions of the village could be maintained. The development of this township would not only give a boost to the tourism industry, here, but industrial areas would also be developed keeping in view the climatic and geographical conditions of the area. This would not only generate employment for the local youth but also provide them many selfemployment opportunities. Urging the youth to focus more on self-employment, he said government jobs were only in the thousands while the unemployed youth numbered in lakhs, therefore self employment and private employment were necessary. The State Government had run various self-employment schemes and loan facilities had been made easy for the youth so that they could become job creators and not takers. The Chief Minister added that the Government had started the Bodhisattva Thought Series programme to work in coordination between the government and the people in the coming years on all issues like migration, employment, health, education, through which suggestions on creating employment and self employment opportunities as well as ensuring better governance and rapid development were received from experienced people who had worked in various fields of governance. Dhami said tthe Central Government had given approval for a project worth Rs 5700 crore. This would develop the area and 300 MW of electricity would also be available in the state and water supply would be given to 6 states. He said that, under the guidance of Prime Minister Narendra Modi and with the cooperation of the Union Government, many works had been done in the state that could not have been imagined earlier. Modi had made the dream of expanding the reach of the railways into the mountains come true. The work on RishikeshKarnprayag rail project and strategically and geographically important Tanakpur-Bageshwar rail project was progressing rapidly. Similarly, work was also being done on the Char Dham All Weather Road and Bharat Mala Project at a fast pace. The Char Dham Yatra was the lifeline for Uttarakhand and these projects would facilitate the Yatra, promote tourism and bring revolutionary changes in the state’s economy. The Delhi Dehradun Expressway would further reduce the distance from Dehradun to Delhi. Present on this occasion were Yashpal Chauhan, Arjun Sharma, Babi Panwar, Lakhi Ram Joshi, Sardar Singh, Mahipal Singh, etc.