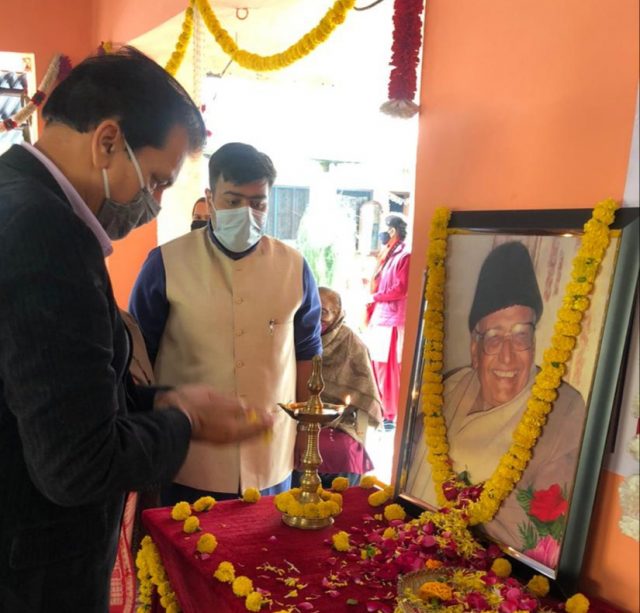 By Our Staff Reporter
DEHRADUN, 12 Dec: On the eighth death anniversary of the first Chief Minister of Uttarakhand, Late Nityanand Swami, a Havan and a Kirtan programme was organised under the aegis of Deendayal Upadhyaya Seva Pratisthan and hosted at Akhil Bhartiya Mahila Ashram, Laxman Chowk.
On this occasion many dignitaries paid their tribute to Late Nityanand Swami.
Vidhan Sabha Speaker Prem Chand Aggarwal was the chief guest on this occasion. He stated that Swami had contributed significantly towards the development of this state. His vision and ideas for the development of the state were still relevant today, Aggarwal claimed.
Aggarwal recalled the time he spent with Swami and claimed that he was fully committed towards the rapid development of the state and he was also a very active social worker throughout his life. He added that Swami was a committed social worker who worked for the upliftment of the poor and underprivileged people apart from his political activities.
On this occasion Rajya Sabha MP Naresh Bansal, MLA and former assembly Speaker Harbans Kapoor, MLA Khajan Das, MLA Vinod Chamoli, MLA Chandra Prakash Pant, Savita Kapoor of Bharat Vikas Parishad, BJP Mahanagar President Sitaram Bhatt, Shubham Verma, late Nityanand Swami’s daughter Jyotsna Sharma, Saraswati Singh, RK Bakshi, Geetika and Vinayak Sharma were among those present.