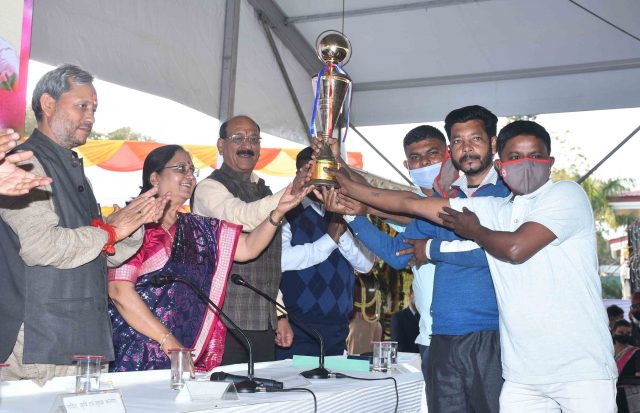 By OUR STAFF REPORTER
Dehradun, 14 Mar: The two-day Vasantotsav – 2021 concluded at the Raj Bhawan here, today, in the presence of Governor Baby Rani Maurya.
The Governor also presented awards to winners of various competitions on the occasion at the concluding ceremony. Chief Minister Tirath Singh Rawat was also present on the occasion.
BHEL won awards in
18 categories, the
Forest Department in 5, IMA, 6, ONGC, 13, and IIT
Roorkee in 6.
Addressing the gathering, Governor Maurya said the purpose was to make the flower exhibition as useful as possible for the people. It also served to promote those involved in floriculture. An apple and lychee festival would also be organised in August-September. Nature was most generous to the people of the state and increased awareness of this was needed. People would understand the importance of forestation and environment conservation when they witnessed the beauty of nature.
Cabinet Minister Subodh Uniyal revealed that 171 institutions had set up stalls at the event. As many as 135 children took part in the painting competition for those between the ages of 12 and18 years. Floriculture would play an important role in boosting the Covid-19 affected economy.
Also present were Secretary, Floriculture, Harbans Singh Chugh, Director Dr HS Baweja, Secretary to the Governor Brijesh Kumar Sant, Additional Secretary Jitendra Sonkar, other officials and guests.