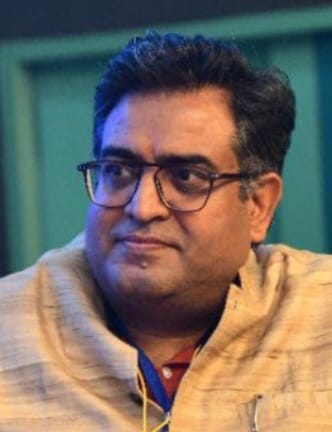 HALDWANI, 11 Jul: Senior journalist Hitesh Shankar is currently the Editor of Panchjanya, which is an official publication of the Rashtriya Swayamsewak Sangh (RSS). Shankar has vast experience in Hindi journalism. Before joining Panchjanya, he had served with the leading Hindi Daily, Hindustan, for a period of 8 years and was its Deputy News Editor, too. He regularly writes columns in various leading publications on current politics and issues of national importance and also appears in debates on various news channels as a political analyst. 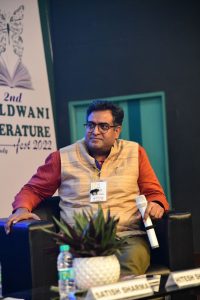 At the recently concluded 2nd Haldwani Literature Festival held at Delhi Public School, Rampur Road, Haldwani, he was in conversation with Satish Sharma, Editor of Garhwal Post, during which he shared his opinion on the current situation in journalism, the present and future of Panchjanya and some other contemporary topics. Here are excerpts from the discussion: 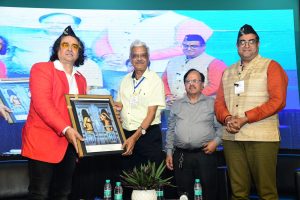 It is a complex issue. In the west, the literacy rate is higher and the media entered the western world much earlier than in India. In the West, the print media reached its saturation also earlier. However, India remains a country with a lot of potential. It is one of the youngest nations and the technology is also growing rapidly in the country. Of course, I agree that some incidents like Covid have affected several things in the country. Some things that were expected to take as long as ten years from now, can be seen now due to Covid. During the peak of the pandemic, the circulation of print publications went down significantly as people were scared to even touch the newspapers and magazines. However, the digital media strongly supported the print media during that period. The media presence remains as strong as ever, only the mediums have changed somewhat.

The popularity of Panchajanya continues and the publication has played a major role in mainstreaming a new nationalist ideology. My question is, to what extent is Panchjanya successful in this purpose?

I will say that the nation is not an issue, not a theory. Because if it was an issue, then there would be some controversy or dispute, too. It is not even an ideology but a feeling inside us. Nation is an emotion and a passion. Panchjanya does its journalism based on this passion for the nation. However, nationalism has existed since much before the country became independent, the BJP or the Sangh did not even exist. One prime example is the song Vande Mataram composed by Bankim Chandra, which united the entire nation. Even before that, the Bhakti movement was such that not only devotion to Gods or spirituality but also devotion towards the nation was promoted. Panchjanya has been keeping the nation’s interest foremost in its journalism. 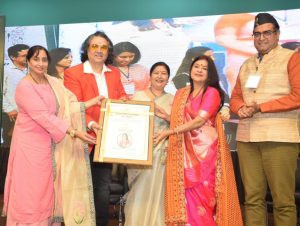 You are a member of some apex bodies related to the media, like IIMC. Can you please share your opinion on how one can avoid publication of unverified or fake news?

There was a time when newspapers were the only medium for the public to get news. You might have seen in old Bollywood films, newspaper vendors shouting, “Aaj Ki Taaza Khabar, Aaj Ki Taaza Khabar”. Then came evening newspapers and they resorted to some misleading headlines to sell their paper.  Then came the one hour news bulletins on TV and finally 24 hour news channels. So, sensationalism came into existence. You know, Panchjanya was the first publication to implement fact checks for the news being published across the country. Panchjanya has never believed in sensationalism or glamour in order to sell and it still follows the same dictum. We stick to the truthful representation of facts and therefor our credibility remains intact.

The new generation of our society is more attracted to glamour and glitter. In such a situation, how far has Panchjanya, famous for serious discussion on many subjects, been able to penetrate into the new generation?

There was a time when there were many leading publications such as Dharmayug, Saptahik Hindustan, etc. Now, even Kadambari has ceased publication. However, Panchjanya has been working and has managed find favour with the new generation. Of course, there have been times when Panchjanya might have seen a slight fall in circulation but, overall, it has continued to grow. Some small publications have resource constraints, too, but the basic requirement in order to sustain is the credibility. Panchjanya’s credibility has sustained. Some have claimed that movements like the Ram Janmabhoomi Andolan, which allegedly polarised society, pushed up its circulation. This is not true at all. There is currently no such ongoing movement which by any stretch of imagination could be termed as polarising. Yet, the circulation of Panchjanya has been growing. My colleagues in Panchjanya are not getting lavish facilities but they are committed. Panchjanya is a growing family even now.

Would you like to share here with the audience some of the recent stories published by Panchjanya that have created ripples in the country?

There are many such stories. I will cite one recent issue that has rattled the nation. You are aware of the current controversy related to Nupur Sharma, a former BJP spokesperson. Her statement was sensationalised by Alt News, a self proclaimed fact check portal. However, who will decide whether it is a genuine fact checker or not? Panchjanya recently undertook some research on so called fact checks by Alt News. Out of a hundred odd such facts, at least 26 fact checks were found in Panchjanya’s research to be fake or false. So Alt News is inversely proportionate to facts and reality to an extent where it may be called as Fault News.

In addition, we also give due importance to non-political news and we highlight positive political news and they have made a good impact on readers. One story that I recall is related to some villages in Rajasthan and their hard work to construct water reservoirs and change their area from water deficient to water sufficient. There are people like Sachidanand Bharti, who constructed 40,000 ponds and these stories were brought up before the world by none other than Panchjanya.  Besides this, only Panchjanya had guts to publish stories of some multinational corporations working against the national interests.

In general, we see that in the mouthpiece publication of a political party or social organisations, there is direct intervention of the top leadership of that party or organisation. How much role is there of te top Sangh leadership in the selection of the content being published in Panchajanya?

Though this question has been answered in clear terms by us in the past, too, let me reiterate that Panchjanya is not a mouthpiece of the RSS. It is published with the same nationalist ideology and passion, but it remains a free publication despite its affiliation with the RSS. Panchjanya is not dependent on RSS for it sustenance and Panchjanya moves ahead with nationalist passion and not by being dictated to by any individual.

What negative impact can fake news create on persons or society?

Of course, fake news or fake narrative can create havoc in society. One recent example is that of Nupur Sharma. While most channels or publications have mentioned or made an issue out of what Nupur Sharma stated, but they deliberately forgot to mention the provocative statement of Tasleem Rehmani, which provoked a reaction from Nupur. This narrative has created a lifelong problem and threat for her besides creating a negative atmosphere in the country. 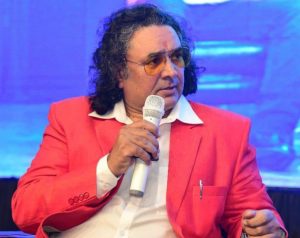 In Panchjanya, there have been some great people like Atal Bihari Vajpayee as editors. In such a situation, Hitesh Shankar would naturally be compared with the former editors. What do you have to say about this and because of this how much of pressure do you feel to fit in their shoes?

Of course, Panchjanya is one of the oldest publications to still survive and thrive. During its long journey, eminent people like Atal Bihari Vajpayee, Deenanath Ji, Bhanu Pratap Shukla, Devendra Swarup and many more have held this post. For me, personally, these people command the utmost respect, and I respect them as I would respect the elders of my family. However, they have left a rich legacy thus making work for me somewhat easier. Of course, the challenge is to maintain the authenticity and credibility that was created by these big names who were my predecessors. The quality work done by them leaves no scope for dilution of the quality of the publication.

Garhwal Post has established itself as a credible, balanced and forward looking newspaper in India. Based in Uttarakhand, the daily is read by the aware, socially and culturally responsible, high-income elite of society.
Contact us: info@garhwalpost.in
https://garhwalpost.in/special-needs-dating-apps/ https://garhwalpost.in/easter-day-date-2022/ m4m hook ups