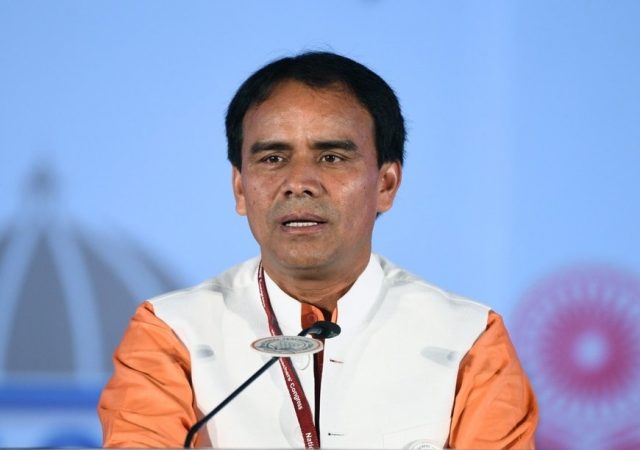 DEHRADUN, 28 Sep: Union Defence Minister Rajnath Singh will visit Peethsain in Pauri District, the native village of freedom fighter and hero of the ‘Peshawar Kaand’, Veer Chandra Singh Garhwali, on 1 October. It may be recalled that 1 October is the death anniversary of Veer Chandra Singh Garhwali. During his visit, Singh will inaugurate a statue and memorial of Veer Chandra Singh Garhwali, informed Cabinet Minister Dr Dhan Singh Rawat, here, today. Rawat further stated that the Defence Minister would also distribute kits to local women by launching the ‘Ghasiyari Kalyan Yojana’ and hand over cheques for interest free loans up to Rs 5 lakh to women under the Deendayal Upadhyaya Yojana. Rawat said that, during the Peethsain visit, Union Defence Minister Rajnath would distribute Ghasiyari kits to 25,000 women of the area under the Ghasiyari scheme. This kit includes two hoes, two sickles, rope, one tiffin box, water bottle and a kit bag. Women would be able to use these during their day to day activities. He claimed that there was a lot of enthusiasm among the local women for this scheme. Dr Rawat said that the state government is committed to the welfare of soldiers, martyrs and their dependants. He said that Chief Minister Pushkar Singh Dhami, Union Minister of State for Defence Ajay Bhatt, Pauri Garhwal MP and former Chief Minister Tirath Singh Rawat and BJP State President Madan Kaushik would also participate in the programme.

Garhwal Post has established itself as a credible, balanced and forward looking newspaper in India. Based in Uttarakhand, the daily is read by the aware, socially and culturally responsible, high-income elite of society.
Contact us: info@garhwalpost.in
https://garhwalpost.in/old-woman-and-young-man/