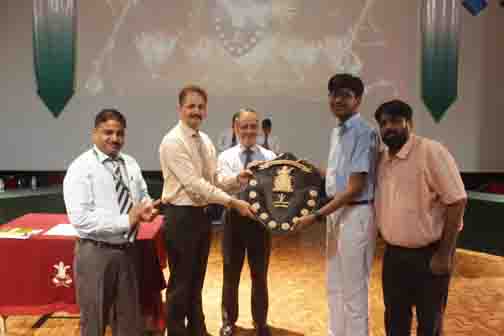 Dehradun, 26 Apr: The four-day mega event, ‘Festilitt 2019’, culminated with the Kashi Naresh Vaag Vibhuti Narayan Inter-School Hindi Debates. The Doon School stole the show to emerge victorious.
The debate started on 25 April with a total of 17 schools participating from all over the country. The debates were conducted in three rounds with six schools making it to the finals, namely Welham Girls’ School, Welham Boys’ School, Vasant Valley, Delhi, RMS, Ajmer, The Doon School and RIMC.
The final began with the arrival of the Chief Guest, Air Commodore Shashikant Mishra. Others present included Gp Capt Sukhen and Maj Jaideep Kairon (Retd).
The topic for the final was: “Increment in the number of Old Age Home indicates the decline of our moral values”. Judges for the debate were Dr KB Pandey, Dr Nootan Smriti and Dr Pramod Bhartiya.
The Chief Guest gave away the prizes to the budding debaters. The Third Best Speaker Award was conferred upon Shaurya Agarwal of The Doon School, Second Best was Cdt Shubhanshu Tripathi of RMS, Ajmer, and the Best Speaker was Cdt Yagna Bharat Pathak of RIMC.
The runners up were RMS, Ajmer, closely followed by RIMC, Dehradun. The judges commented ably on the topics and the way the students debated.
RIMC Commandant Col Vivek Sharma proposed the vote of thanks. This was the first time that RIMC conducted all its mega events simultaneously i.e. The All India Challenge Quiz, The Hugh Catchpole All India Inter School English Debates and Kashi Naresh Hindi Debates. The Hindi Debating Competition was coordinated by Khushiram, HOD, Hindi.