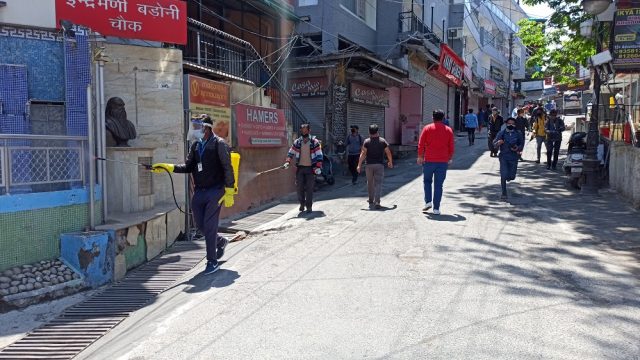 By Our Staff Reporter
Mussoorie, 7 May: Mussoorie is being sanitised on a large scale by the municipal administration. The town has been divided into 4 zones by Ashutosh Sati, Executive Officer of the Mussoorie Municipality. Zonal in-charges have been appointed, under whose supervision the work will be got done.
In the Corona era, sanitation workers working in the front line are working day and night to save the lives of the people. Health facilities are being provided by the municipality to the sanitation workers, but many of them work under contract and their wages are very low. They have also not been provided life insurance. The sanitation workers have demanded that the municipal administration increase their wages and provide life and health insurance, to protect their families.
Executive Officer Sati said also agrees and feels these demands should be conceded. He asked the public representatives of the Municipality to pass the proposal at their board meeting. He promised to raise the issue on the appropriate forums. Sanitary inspector Kiran Rana was also present on the occasion.