SHIMLA, 13 Sep: In his pursuit of expeditious completion of SJVN’s ongoing projects in Nepal, CMD Nand Lal Sharma had another meeting with the Prime Minister of Nepal, Sher Bahadur Deuba, in Kathmandu. SJVN is implementing a 900 MW Arun-3 Hydro power project and the downstream 679 MW Lower Arun project besides a 400kV Transmission line project in Nepal.
On his return from his visits to the company’s projects in Nepal, Sharma apprised the Prime Minister about the progress of 900 MW Arun-3 Hydro Electric Project. The objective of Sharma’s meeting was also to apprise the PM of certain concerns of SJVN regarding faster completion of the project. He discussed ways of faster development and also harnessing of hydro power potential of Himalayan Rivers in Nepal. He again emphasised the concept of one basin one developer to optimise the resources and faster development of hydro projects.
The Nepal Prime Minister appreciated the progress of Arun-3 hydro power project and assured Sharma of suitable action by the Government of Nepal to address the concerns of SJVN.
Earlier, during his visit to SJVN’s projects in Nepal, CMD Sharma reviewed the progress of the Power House, Transformer Hall and Surge Shaft of the 900 MW Arun-3 project. In his meeting with Managing Director of M/s Patel Engineering Ltd (Contractor of C-2 Package), instructed resolution of all the issues and expedited commissioning of the project by April, 2023.
He also reviewed both major civil works packages of the project. A meeting was also held with M/s JAL at the dam site where Sharma asked the Civil Contractor of the Dam and part HRT to speed up the works to match with completion schedule of the project.
He also reviewed the progress of 400 kV Transmission Line being implemented by SJVN for evacuation of power from the upcoming projects. He also held a meeting with representatives of M/s PGCIL, M/s KEC (Tower Packages Contractor), M/s GE (Substation Package contractor) and representatives of M/s APAR (Conductor Package contractor). He Sharma instructed M/s KEC to expedite activities related to Tower Package, so as to match it up with the commissioning schedule of Generation Component 900 MW Arun 3 HEP.
Sharma also inspected the progress of works at other components of the 900 MW Arun-3 Hydro Electric Project in Nepal. He inspected the Power House works, construction of Surge Shaft and Head Race Tunnel. He also inspected the works at the Dam Site. 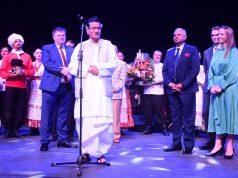 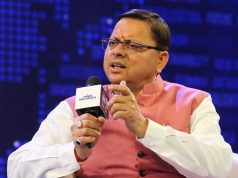 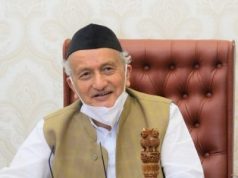