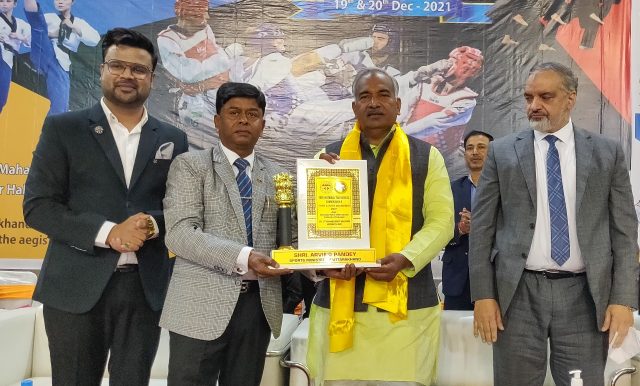 By Our Staff Reporter
Dehradun, 19 Dec: The 12th National Taekwondo Championship, organised by the Uttarakhand Sports Taekwondo Association, commenced at Maharana Pratap Sports College, Raipur, today.
The two-day-long championship was inaugurated in the presence of State Sports Minister Arvind Pandey, Chairman, Uttarakhand Sports Taekwondo Association, Dr S Farooq, Acting President, UKSTA, Raunak Jain, Organising & General Secretary, UKSTA, Javed Khan, ex-VC HNB Garhwal University IP Saxena, GM Lee Wanyoung, and GM Tae Joon Sung.
On the occasion, Sports Minister Pandey said, “My best wishes to all the Taekwondo players present here, who have long been wanting to compete in a championship and have generously participated in this championship in our state. It would be a dream come true to see players emerging from this championship and representing our nation in future Taekwondo championships at the global level!”
During the programme, all present paid tribute to CDS General Bipin Rawat. This was followed by the release of ‘Rising Era Volume – IV’ by the Sports Minister and other guests present on the occasion.
Addressing the players, the Chairman of Uttarakhand Sports Taekwondo Association, Dr S Farooq, said, “This is a golden opportunity, a unique platform for all the young Taekwondo players present here from different parts of the country to rise in their career and achieve unprecedented success. I am sure that many players who have come to take part in this national-level tournament will one day represent our country at the international level and win gold medals!”
The Taekwondo Championship is being organised in all weight categories, which will include Senior, Junior, Sub-Junior, and cadets.
Over 15 states, including Uttarakhand, Haryana, Gujarat, Punjab, Madhya Pradesh, Manipur, Uttar Pradesh, Assam, Jharkhand, Orissa, Maharashtra, Chandigarh, Nagaland, Rajasthan, and Sikkim are participating in this two-day-long championship.
The occasion was also graced by the Treasurer, Hina Habib, Joint Secretary Raza Hussain, and Mohd Umar among others.