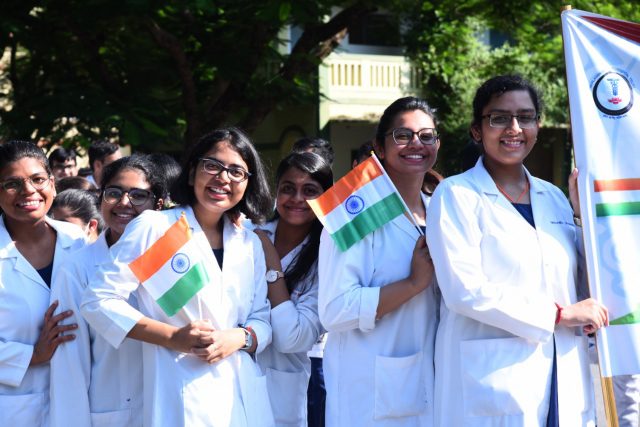 Dehradun, 13 Aug: A five-kilometre long ‘Prabhat Pheri’ was organised by the students and staff of Swami Rama University to sensitise the public about the ‘Har Ghar Tiranga’ campaign and commemorate the ‘Amrit Mahotsav of Azadi.’

Participants, proudly holding the national flag of India, raised slogans like ‘Bharat Mata Ki Jai’ and ‘Vande Mataram’. The staff and students of the University played a vital role in organising the ‘Prabhat Pheri’. They sent out a strong message to individuals and organisations to hoist the Tricolour at their homes from 13 to 15 August.

Hundreds of students from various colleges of SRHU chanted patriotic slogans. Expressing his views on the occasion, Dr Vijay Dhasmana, Vice Chancellor, SRHU, said that the ‘Amrit Mahotsav of Azadi’ reflects the socio-cultural, political and economic identity of India, which is dear to all Indians. Everyone should celebrate this festival with full joy and fervour.

Dr Dhasmana further stated that various programmes are being organised in the university relating to this festival.

The ‘Prabhat Pheri’ was a successful event. Hundreds of students from various colleges of the university including Medical, Nursing, Paramedical, Management, Engineering, Yoga Science, Bio Sciences and Vocational Studies participated most enthusiastically. The ‘Prabhat Pheri’ commenced from and culminated at the Tubewell Chowk of the University. Dozens of patriots who made the supreme sacrifice for the country were remembered on the occasion. After the culmination of the pheri, students and staff divided themselves into three groups and reached out to various neighbouring areas raising slogans of patriotism.

A Rangoli competition was held to celebrate India’s 75th Independence Day. This time the function took the form of a celebration rather than a solemn ritual. Students showcased their creative skills by participating in the Rangoli Making Competition. They expressed their ideas by adorning the floors in different hues, representing the diversity of India.  Meenakshi and Riya Negi (GNM) bagged the first prize in the Rangoli Competition; Ayushi Kumari, Babita and Divya Rawat (BSc N), bagged the second prize, and Sarika Pokhriyal, Anshul Sharma and Ayushi Bhatt, won the third prize.

In the Speech Competition, Tushan Kumar bagged the first prize (MBBS); the second prize was won by Nikita Maithani (BSc Biotechnology); the third prize was bagged by Komal Mishra (BASLP); and the fourth prize was won by Sowmya Khanna (MBBS). Muskan (BSc Nursing) and Vaishnawi Baloni (BSc Nursing) received prizes. In all, there were 73 participants, 23 Finalists and 6 Winners.

The winners will receive their Awards on 15 August after the Flag Hoisting Ceremony.