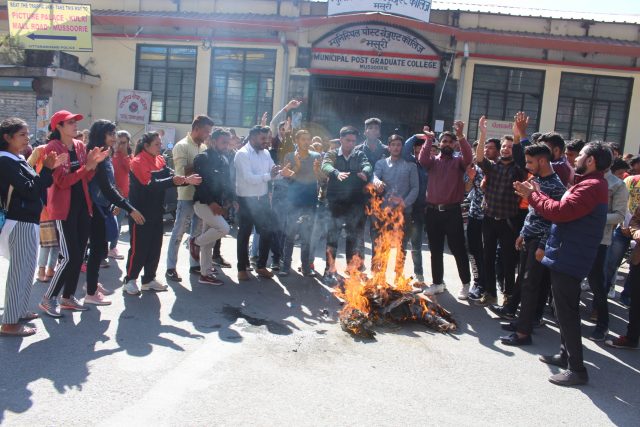 MUSSOORIE, 4 Nov: Effigies of the Garhwal University Vice Chancellor and Higher Education MoS Dr Dhan Singh Rawat were set on fire today by a group of students led by Students’ Union President Prince Panwar, representing the NSUI and Akhil Bharatiya Vidyarthi Parishad, at the MPG College main gate, to protest against increased fees for the first semester. NSUI and Akhil Bharatiya Vidyarthi Parishad activists also sent a memorandum to the Vice Chancellor and the Minister of Higher Education demanding immediate withdrawal of the increase in fees. The students said that the government was talking about raising the standard of education, but actually trampling on the rights of students. They said the Garhwal University had suddenly increased the fees by 3 times, which had created a problem for the students. They warned that, if the increase in fees was not withdrawn soon, they would all come out on the streets in protest and lock up the college. ABVP leaders Sumit Bhandari, Jagpal Gusain, Sanjit Singh, Naveen Shah, Pritam, Suraj Kumar, Sanjay Aswal, Ashish Bhatt, Meghna, Abhilash, Sapna, Ajay, Kunal, Manish, Amit, Tripti, Rohit, Munkala, Sarvind, Sandeep, Manoj and many others were present.

Garhwal Post has established itself as a credible, balanced and forward looking newspaper in India. Based in Uttarakhand, the daily is read by the aware, socially and culturally responsible, high-income elite of society.
Contact us: info@garhwalpost.in
https://garhwalpost.in/fun-dating-activities/