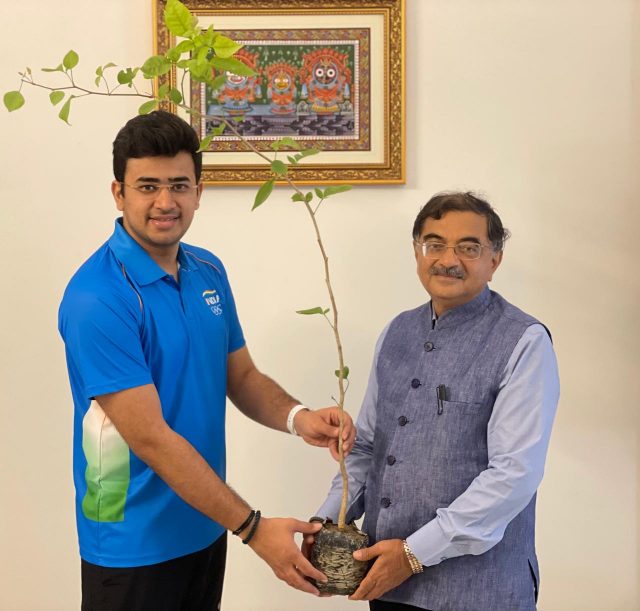 DEHRADUN, 9 Aug: In a unique and fragrant homage to the fallen soldiers of the Himalayas and Uttarakhand, Tejasvi Surya, National President of the BJYM and MP, Bengaluru South, is sending saplings of sandalwood from Karnataka for the Uttarakhand War Memorial, Dehradun. The Sandalwood saplings will always remind the visitors of the humble tribute offered by the people of Karnataka for the soldiers who laid down their lives defending the motherland in various wars and military actions. The Uttarakhand War Memorial ‘Shaurya Sthal’ has several veterans on its board and former Defence Minister, the late Manohar Parrikar, had laid its foundation stone. It has received blessings from Prime Minister Narendra Modi and the present Defence Minister, Rajnath Singh. Three former service chiefs Gen VP Malik, Admiral DK Joshi, and Air Chief Marshal Arup Raha have supported the Uttarakhand War Memorial in special video messages. Tejasvi Surya gave a sacred sapling to Tarun Vijay, former RS MP from Uttarakhand, as a symbolic gesture and promised he would come to Dehradun to inaugurate the ‘Chandan for Veer Balidani’ campaign.

Garhwal Post has established itself as a credible, balanced and forward looking newspaper in India. Based in Uttarakhand, the daily is read by the aware, socially and culturally responsible, high-income elite of society.
Contact us: info@garhwalpost.in
canva save the date