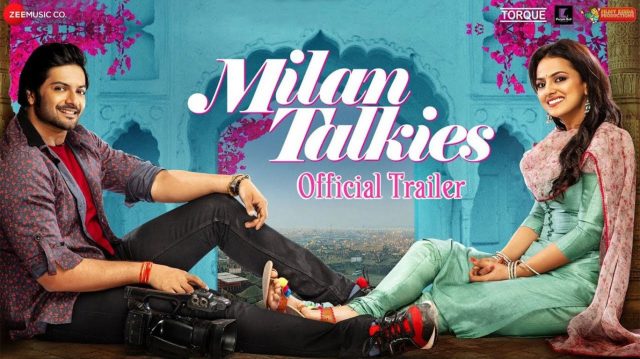 The story teller in Tigmanshu Dhulia in Milan Talkies celebrates the glory of cinema and its impact on the lives of people – how cinema is an extension of oneself and how the stories in films, to some extent, are inspired or influenced by real life incidences. In the pursuit of paying a tribute to single-screen cinema, Dhulia makes a truly masala film, that works on a filmy formula with quintessential ingredients- a hero, a heroine, a conservative baap, a frustrated villain with an erectile dysfunction married to the heroine, an anti-Romeo squad, filmy aspirations, adorable friends, a loud holi song, brawls, kicks and punches, and a romantic story; all tracks running parallel. In his wispy endeavour, Dhulia carelessly adds too many flavours in one gourmet, and ends up dwindling the core essence of all these segments. He opens many fronts but in haste, leaves many ends loose. His work has been highly appreciated in films like Haasil, Paan Singh Tomar, and Saheb Biwi aur Gangster. The virtuoso director restores the titillating effect he’s known for in the first half, but the second half is a damp squib. The only dominating aroma that remains appetising in Milan Talkies is the remarkable performance by the cast and to a great extent, its entertainment factor, with all characters comfortable in the typical eastern UP’s accent, talks and humour. Anirudh Sharma aka Anu (Ali Fazal), an ambitious low- budget film maker in Allahabad, often resorts to cheating to finance his budget- deficit, helping weak students pass the exam by various techniques of dubious virtue. In return he is handsomely paid. He invests in his films that are screened in Milan Talkies, a single-screen cinema of his town. Maithili (Shraddha Srinath) approaches Anu for help as her marriage proposal rests on the condition of her pass/fail status. Her first glance rigorously churns the romantic emotions in him. He crosses all dynamic hurdles to make the girl pass the exam. This particular segment of the film is stretched to brew the love story but it remains the most endearing portion. The hypnotizing effect is felt strongly and the beguiling romance begins in Milan Talkies right in front of a big poster of Shah Rukh Khan and Kajol, with many romantic flings in the projector room with full support from Sanjay Mishra, the projectionist of the cinema hall. A film that is easy-breezy in the first half runs out of steam in the second half. The narratives goes weak, the crispy screenplay becomes dragged. The background music nurtures the story. The songs are too loud and a misfit, lending a bathetic treatment to the film. Ali Fazal is completely devoted in his whimsical role that seems to be an extension of his character in Mirzapur in terms of dialogue-delivery and demeanour. Shraddha Srinath compliments him well with her charm, acting, and screen presence. A debutant in Hindi cinema, this polished Kannada-Tamil films award- winning actress performs top- notch. Ashutosh Rana as Maithili’s orthodox father, pundit by religion and profession, carries the authoritative aura with ease. Sikander Kher in a coarse role as the head of the vigilante group gives a befitting performance. Ashutosh, Kher and Rajeev Gupta (Maithili’s uncle) create the apt atmosphere to maintain the small town tempo with their talks, gestures and attitude. The chemistry between Ali and Shraddha is compelling. Ali’s eyes and Shraddha’s consenting smile, both ooze bundles of subtle love. Milan Talkies’ buoyant love story has frequent intervention through bolts and jolts. The stern warnings by Maithili’s rigid father and manhandling by her loutish husband, the light bantering by her Mamaji, the strong bond between Anu and his friends that fails to fade through thick or thin, the brutal attack by the anti-Romeo gang on the crucial organ of Anu’s film’s hero when spotted with his girl-friend, the sweet bond shared by Maithili and her friend; all these are the pluses of Milan Talkies. It’s a pleasant change to see Dhulia in floral shirts and light mood as Anu’s cinema-obsessed father, who lives in his own movie world even in real life, quite contrary to his earlier serious roles. Another talent, Deep Raj Rana, a leader of goons, silently nurtures his feelings to be an actor but expresses them ferociously to demand a role in Anu’s film. His role doesn’t allow him to show his acting prowess except for adding another seen- before kind of a dimension to the story. Milan Talkies’ aims are apparent from the very beginning, i.e., to entertain. Dhulia too wears the cap of a light-hearted character and joins the bandwagon. Any film that keeps entertainment as the main criteria often ignores the other key aspects. The light treatment given to the title fades the solo goal meant to pay tribute to cinema. Dhulia’s efforts are admirable; the film does entertain, if the purpose is so. I go with two and a half stars.

Garhwal Post has established itself as a credible, balanced and forward looking newspaper in India. Based in Uttarakhand, the daily is read by the aware, socially and culturally responsible, high-income elite of society.
Contact us: info@garhwalpost.in
https://garhwalpost.in/singles-in-vancouver-bc/