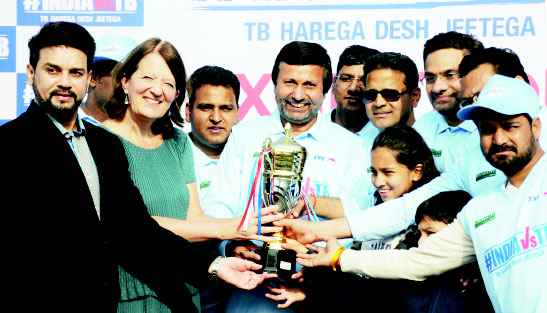 By OUR STAFF REPORTER
DEHRADUN, 3 Feb: The two-day TB-Free India Summit-2019 and India Vs TB Cricket Competition were inaugurated by Union Minister of Health Jagat Prakash Nadda, Uttarakhand Finance Minister Prakash Pant and MP Anurag Thakur by lighting the traditional lamp at Major Dhyan Chand National Stadium, New Delhi on Sunday.
While complimenting the participants involved in the India Vs TB Cricket Match and all those associated with this campaign, Pant said that the sensitivity with which MP Anurag Thakur had taken initiative on ‘TB Harega Desh Jeetega’ campaign, the Uttarakhand Government is also taking it forward, extending full support to the campaign.
Pant said that, while the Government of India wanted elimination of tuberculosis in the country by year 2025, the Uttarakhand Government had resolved to make the state free from tuberculosis by year 2024. He said the population of the state of Uttarakhand was about 1 crore and 22,131 persons had been diagnosed with tuberculosis in year 2018, out of which 539 people were suffering from MDR (Multi Drug Resistant TB). They were being carefully treated under the supervision of the Uttarakhand Government. The Government was providing better facilities under the multi-target therapy. In order to implement this important campaign in a significant manner, an awareness campaign was being carried out in the state and the state government would be successful in elimination of tuberculosis from the state by year 2024.
On the occasion, mementos were given to the members of the Uttarakhand CM XI Team by Union Minister of State for Civil Aviation Jayant Sinha.
In the India Vs TB cricket match, the Uttarakhand CM XI registered victory against the Delhi CM XI cricket team. Sitarganj MLA Saurabh Bahuguna was declared the Man of the Match.
The Uttarakhand CM XI team was led by Finance Minister Prakash Pant. The
Uttarakhand team comprised Prakash Pant, MLA Vinod Kandari, Mukesh Koli, Saurabh Bahuguna, Surendra Singh Jeena, Dhan Singh Negi, Inspector General of Police Amit Sinha, Sanjay Gunjiyal, Secretary Ashish Joshi, Brijesh Kumar Sant, District Magistrate, Rudraprayag, Mangesh Ghildiyal, and Senior Superintendent of Police, Haridwar, Janmejay Khanduri.