Mussoorie, 23 Sep: Wynberg-Allen School hosted an inter-class basketball tournament for the boys of classes 7-12, named the Macmillan Cup. One team from each class participated in the tournament, making a total of six teams. 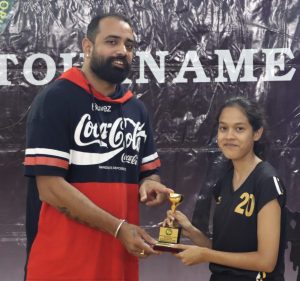 The Macmillan Cup for the year 2022 was lifted by class 11, which defeated class 12 in an exciting final with a score of 21-17. Tashi Tenpa of class 11 was awarded as the Most Valuable Player of the Tournament.

In the Lehmann’s Cup, an inter class basketball tournament for girls, class 10 defeated class 12 with a score of 29-19. Hiranya Jain of class 10 was awarded as the Most Valuable Player of the Tournament.

The Chief Guest at the finals was Vishvesh Bhriguvanshi, Arjuna Awardee and Captain of the Indian Men’s Basketball Team. He awarded the trophies to the winners.