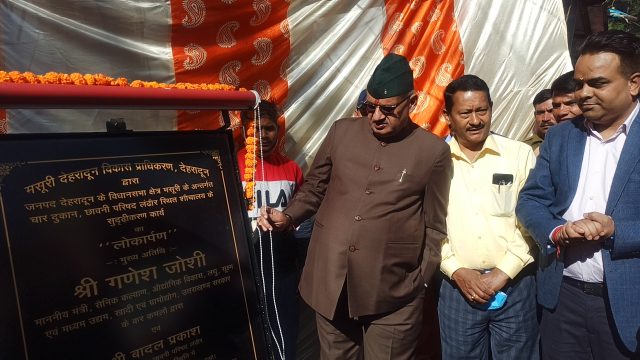 By Sunil Sonker
Mussoorie, 26 Oct: Cabinet Minister Ganesh Joshi inaugurated a 30.5 metre high national flag, here, today.
The flag has been installed by the Mussoorie-Dehradun Development Authority at Jhula Ghar Chowk. After the launch, the national anthem was played by the ITBP band.
Minister Joshi said that the national flag reflected the nation’s identity and he felt pride to see it on such a prominent site.
Joshi claimed that maximum development had taken place in the state in the past five years, and over ten years in his Mussoorie assembly constituency. He said that parking is a big problem in Mussoorie, which is being constructed. The effort was on to get rid of the traffic jams here.
He reminded that a huge parking lot is being constructed at Zero Point. At the same time, a tunnel would also be constructed to connect Mussoorie. Its foundation stone would soon be laid by Chief Minister Pushkar Singh Dhami.
He added that, during the recent disaster, the entire government and administrative machinery took quick action and worked to provide relief to the people affected. The young Chief Minister inspected the disaster-prone areas from day one. He expressed the hope that the Prime Minister would announce a package for Uttarakhand during his visit to the state.
MDDA Executive Engineer Shyam Mohan Sharma said that the National Flag has been hoisted in Mussoorie under the Flag Code of India. It is 30.5 metres high and attractive lights have also been installed. It would be looked after by the construction agency.
Present on this occasion were MDDA Secretary Mohan Singh Barnia, BJP Mussoorie President Mohan Petwal, BJYM National Vice President Neha Joshi, General Secretary Kushal Rana, Amit Panwar, Manoj Kharola, RN Mathur, former Municipal President OP Uniyal, Councilors Madan Mohan Sharma, Jasoda Sharma, Arvind Semwal, Mukesh Dhanai, Dharampal Panwar, Pushpa Padiar, Dhan Prakash Agarwal and Rakesh Agarwal.