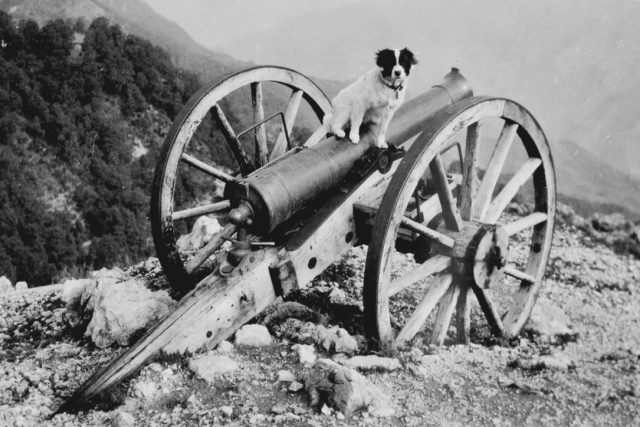 For those tuning in late, there is a reminder: Gun Hill at 7,029 feet is our second highest peak in Mussoorie west and is the main reservoir of the hill station’s water supply. If you would like to see it for yourself, take a walk, ride a pony or step into a trolley that carries you along a 1,310-foot ropeway from the Mall to the top. ‘Why call it Gun Hill?’ complains Gaurav Misra, who like Agnom Teenup and others spent their childhood here in school. ‘There is no gun there!” In the good old days, believe me, there used to be a cannon brought from the Arsenal in Calcutta, inscribed with: ‘H.H. Maxwell, 1865, Cossipore.’ Thereafter noon was marked by a loud blast. The gun was always a source of concern. When pointed eastwards, two ladies – Miss Brian and Miss Hamilton – running the Grey Castle Nursing Home complained that ‘when the gun fired, it loosened plaster from the ceiling of the wards, which fell on patient’s beds, unnerving them’. Had it been pointed northwards, it would have ‘blasted away to kingdom come, Mr Yerborough’s house, Dilkusha.’ Turned northeast and immediately there came a complaint from Crystal Bank. Swiveled south, it succeeded in doing what cannons are meant to do: the gunner or time-keeper, in all likelihood, forgot to remove the ramrod from the barrel; and on booming noon, the cannon sent the ramrod clean through the roof of Stella Cottage, (now home to advocate Aaloke Malhotra, and generations of that wonderful family). Mercifully no one was hurt as the occupants happened to be out at the time. Opposition to the gun mounted. As a last resort, it was turned to face the Mall. Now the boom came by ramming a mixture of moist grass and waste cotton down the barrel. An accidental overcharge of powder sent one of these balls plop into the lap of a lady being carried down the hill in a dandy to Rajpur. ‘The jolt the coolies gave her was even more un-nerving than the bouquet.’ That was the last straw or the last straw canon-ball – the gun was silenced. The ‘economy drive’ that followed the end of the Great War on 28th of July 1919, saw an all round shortage of metals in the market. Our City Father’s took a call, resolving to get rid of it. The price was good, so they got rid of it. The wooden frame of the gun carriage lasted a few monsoons, until the time it was ripped apart, bit by bit, for its wood. I find our obsession with Time borders on a fetish. For instance, on Empire Day, May 24, 1909 when electricity lit up the station, the dimming of lights, popularly known as ‘the wink’ was resorted to. Lights ‘winked’ between four minutes to nine o’clock and three minutes past nine to let the public know it was exactly nine o’clock. That practice continued until 1934, when someone pointed out that it infringed on the Indian Electricity Act. Come to think of it, when was it that you were asked by a passerby: ‘Kitney baj hain?’ ‘This common phrase, was more in the manner of a greeting or an acknowledgement. It continued well into the 1970s, and was more like two ships passing one another in the dark tooting their whistles. The death knell of pocket-watches, coincided with the arrival of wristwatches. The later ensured that soldiers fighting in the trenches, in the First World War, could keep both their hands free at all times. Not too long ago, a dowry was considered incomplete without a watch. In every wedding: they had one for the bride and one for the groom. And in the 1930s, Maharaja Tej Singh of Alwar, holidaying at the Charleville Hotel, caused quite a sensation by gifting away West End watches to all those who happened to call upon him to pay their respects. Along came mobile phones to play complete spoilsport. They tell you the time even when you may not want to know. As I write, a hundred years have passed since the gun on Gun Hill went silent.

Garhwal Post has established itself as a credible, balanced and forward looking newspaper in India. Based in Uttarakhand, the daily is read by the aware, socially and culturally responsible, high-income elite of society.
Contact us: info@garhwalpost.in
honeymoon getaways near me my space dating arkansas hookup