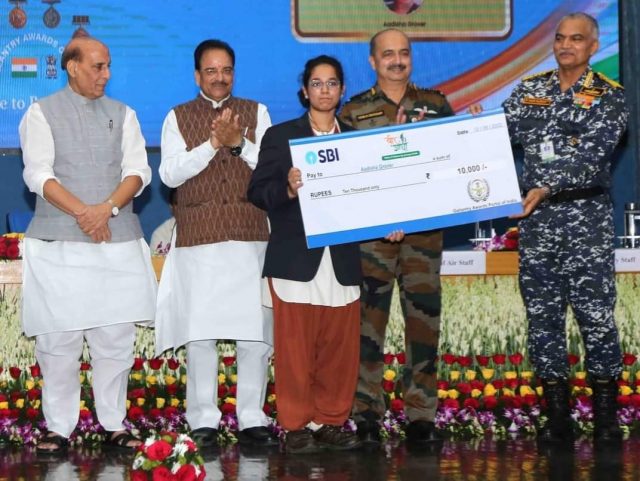 Dehradun, 14 Aug: Adisha Grover, daughter of industrialist Vibhu Grover and Preeti Grover of Kotdwar, has done Uttarakhand proud again by winning another award for her painting. This award has been given to her for her painting done for the Veergatha Competition organised jointly by the Union Education and Defence Ministries. Under this competition, a painting competition was organised on the theme, “Unsung Heroes”, depicting the brave of our land. 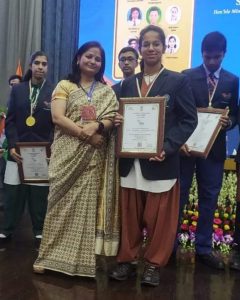 She is among the 25 Super Awardees of the Veergatha Competition. These 25 winners were selected out of 8 lakh contestants across the country. She has been chosen in the category of Class 11 and 12 students.

She was handed over the award at a function held yesterday in New Delhi by Defence Minister Rajnath Singh and Union Minister of State for Defence Ajay Bhatt in the presence of Chiefs of the Army, Air Force and Navy and Union Education Minister Dharmendra Pradhan.

Though she had won the award earlier, the award ceremony could only be held now. Meanwhile, she was also invited to his residence along with her family by former Union Minister Ramesh Pokhriyal ‘Nishank’ and honoured. He praised her for her excellence in painting.

Adisha is currently a class 12 student of Acharyakulam, Patanjali Yogapeeth, in Haridwar. She is the only student from Uttarakhand to have won this prestigious award. She has given credit for her award to her teacher Sanjay Jaiswal and the principal of Acharyakulam Anuradha Kaul besides her parents. It may be pertinent to point here that Adisha has been very focussed and has followed her passion for painting since her childhood.

Garhwal Post has established itself as a credible, balanced and forward looking newspaper in India. Based in Uttarakhand, the daily is read by the aware, socially and culturally responsible, high-income elite of society.
Contact us: info@garhwalpost.in
best dating free dating apps