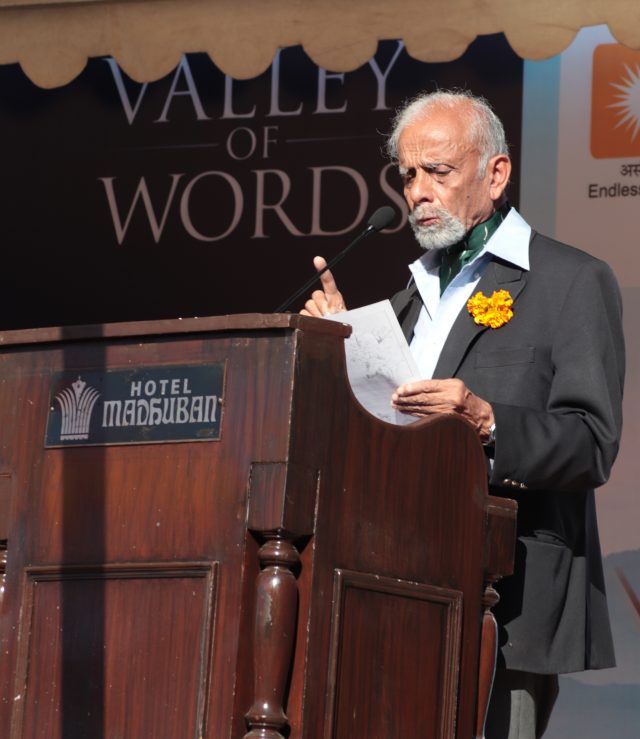 DEHRADUN, 16 Nov: The opening of the second day of Valley of Words International Literature and Arts Festival started off with the launch of the “Marigold” as India’s Flower of Remembrance. Anup Nautiyal initiated the launch by stating the importance of the flower as a symbol for the remembrance of the army-men who sacrificed their lives in the line of duty. He said, “In the context of India, Marigold represents the kesari colour, which signifies courage and valour.” The statement proved the relevance of the Marigold as a symbolic flower of remembrance. The inspiring introduction given by Maj. Gen. Ian Cardoza was the highlight of the event. “Too big to have the poppy, too old to have the poppy” was the idea he propounded, in arguing that the British poppy is not suitable as India’s flower of remembrance, since this symbol should be chosen on the basis of its close proximity with native or indigenous elements of the society. Instead, the humble and prevalent marigold is more apt for the occasion. Maj. Gen. Cardozo remembered the sacrifices of the army-men in saying, “Everyday soldiers die in the line of duty – in the marshes of Manipur, in the jungles of North-East and also in anti- terrorist initiatives.” He drew from his poem and its lines: “She sits beside by her window, looking up the village track. For her husbands, sons and brothers but they won’t be coming back.” Maj. Gen. Cardozo’s speech provided inspiration to a lot of the NCC cadets seated in the audience, to inculcate in themselves values that would serve the cause of the nation. One of the audience members, Parchana Paul from DVPG, said, “The symbol for the remembrance is quite important as it associates the qualities of courage and sacrifice with the people who died for us.” As a teacher, she said that the event motivated her students to join NCC and work for their nation. The event was followed by the beautiful gesture of pinning the Marigold to everyone’s hearts, with each person doing so for the one standing on their left. It was a poignant moment indeed. This continued in the second day’s first Military History session at Blue Star Hall, which started with a recital of the poem “Marigold” written by Maj. Gen. Cardozo – embodying his love for the flower, and his tireless fight for it to be accepted as India’s flower of remembrance. The poem was heartfelt in recalling the men who lose their lives on the field, forgotten until only recently when India commemorated its first Remembrance Day and finally acknowledged the lost valiant men of the country. The session, chaired by Shiv Kunal Verma, began with Maj. Gen. Cardozo speaking about his book The Indian Army in World War I 1914-1918. “Even though this is a book on a war long ago, I believe that it’s as relevant as any other war today” he said, adding on by speaking on his own experiences of his regiment, the Gorkhas, when they were sent away into the enemy lines with very little ammunition and rifles. “It was the 70s and the army were poor, but we werebrave”-thus they were able to win over the enemy that was sixteen times larger than their own. An impossible feat, telling us of the bravery of our country’s army-men. The session was then taken over by Air Marshal Sagat Shunik, who spoke of the camaraderie amongst the various forces of the army. He recalled how the army and the air force came together near the glaciers at the Pakistan border when a helicopter broke down. The men not only saved it from the enemy bullets but also repaired it back and successfully returned it to the air base. “The history of India ends in the 1950s. The histories of war and the events after have been conveniently disregarded. The children need to know that their history has so much more,” Shaunik said as he spoke of the lack of writing on military history and documentation of the many wars that the country has fought. The session ended with the audience filled with patriotism as the young men and woman became rejuvenated to serve their country.