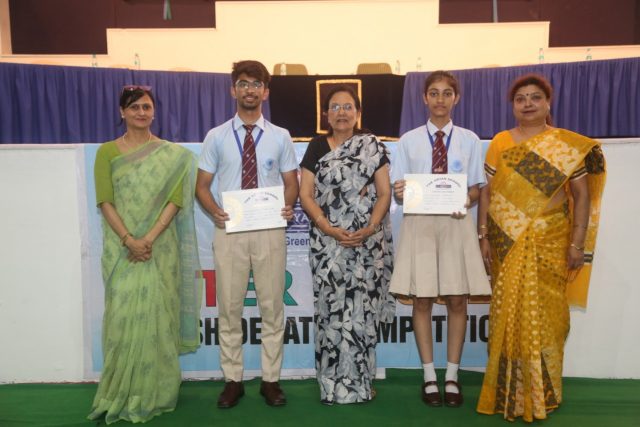 Mehek Puri, Nandan Gureja emerge as ‘Best Speakers’
By OUR STAFF REPORTER
DEHRADUN, 20 Jul: The Aryan School hosted an inter house debate competition for students from class ninth to twelfth within the school premises today.
The debate competition was held on topics revolving around Shakespeare. The topics were ‘Shylock is a villain and not a tragic figure from ‘The Merchant of Venice’ and ‘Caliban is a villain and not a tragic figure from ‘The Tempest’.
Atharwa House bagged the first position  while Yajur house stood runners up in the debate competition. The students were judged on the basis of confidence, logic, flow and content.
The title for the best speaker from class 9th and 10th group was presented to Mehek Puri while from class 11th and 12th it was awarded to Nandan Gureja.
The students from all four houses debated vehemently in favour and against the motion. The audience also participated by asking questions and expressing their opinion.
Director Doon World School Veena Kalia was the judge on the occasion. While addressing the audience she suggested the students to keep improving the art of their expression. She motivated them by saying that their efforts shall enhance their performance even further.
Principal B Dasgupta was also present on the occasion.