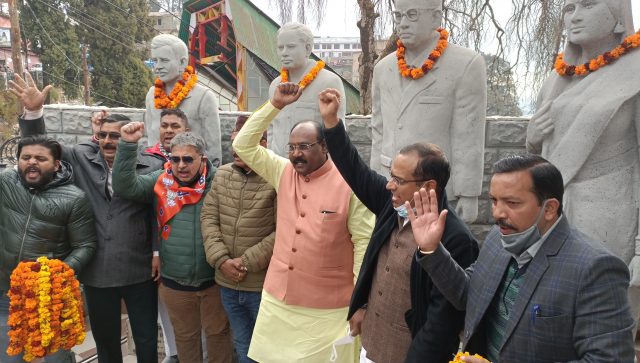 By Our Staff Reporter
Mussoorie, 4 Jan: BJP’s Vijay Sankalp Yatra, which reached Mussoorie on Monday, left for Tehri today. BJP Scheduled Caste Morcha National President Lal Chand Arya and BJP Senior Leader Shaurya Doval flagged off the yatra for Tehri.
Earlier, Shaurya Doval and Lalchand Arya visited the martyrs’ memorial. Floral tribute was paid to the martyrs of the statehood movement. Doval said that workers of the BJP are interacting with the public through the Vijay Sankalp Yatra. The people are being informed about the development works undertaken by the state and central governments. He said the people should bless the BJP, once again. He reminded that Prime Minister Modi is continuously working for the development of a new India, in which Uttarakhand also had a major role to play. He said the target this time is to get more than 60 seats in Uttarakhand. He claimed that a government in continuity would develop the state better, particularly when it has provided clean governance.
Shaurya added that Arvind Kejriwal only makes popular announcements that have no basis, only intended to mislead the public.
Lalchand Arya said that, in the last 5 years, many important works had been done by the Uttarakhand Government in terms of public welfare and development.
Cabinet Minister Ganesh Joshi reminded that Union Minister Nitin Gadkari would conclude BJP’s Vijay Sankalp rally in Khatima and Defence Minister Rajnath Singh would come to Uttarkashi on 6 January. He said that the soldiers were never respected by the Congress; rather their leaders had always questioned their valour.
BJP leader OP Uniyal, convener of the Mussoorie Vijay Sankalp Yatra, and Mussoorie BJP President Mohan Petwal , along with senior BJP leader Virendra Bisht, Kushal Rana, former Vice President, Cantt, Badal Prakash, Mukesh Danai, Manoj Kharola, Sapna Sharma, Abhilash, Anil Singh and others were among those present.

Garhwal Post has established itself as a credible, balanced and forward looking newspaper in India. Based in Uttarakhand, the daily is read by the aware, socially and culturally responsible, high-income elite of society.
Contact us: info@garhwalpost.in
matchmaker raleigh nc genuine hookup sites