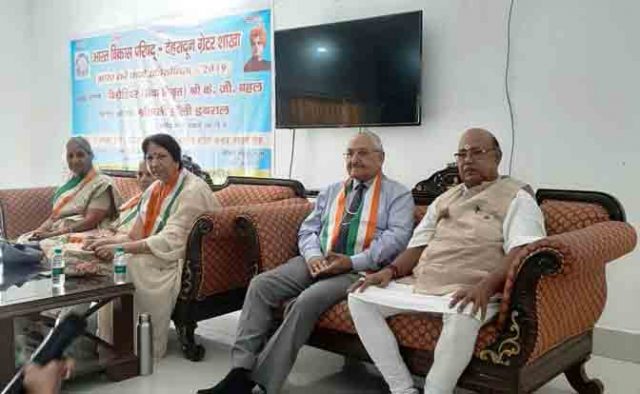 Dehradun, 20 Oct: Bharat Vikas Parishad, Dehradun Greater Chapter, held a contest, ‘Know India’, for students at the ‘Akhil Bhartiya Mahila Ashram’, Laxman Chowk, at which Brig KG Behl (Retd) was the Chief Guest. Noted poetess Dolly Dabral was the Guest of Honour along with Ish Ahuja.
Students from six schools were selected after conducting written tests in which more than 600 students from various schools and colleges participated. The winners from these schools in two categories – classes 6,7,8, and classes 9,10,11,12. They were divided into four teams and given oral questions to answer. Manmohan Kumar Nagalia conducted the tests. Five normal, buzzer and then rapid fire rounds were held and enjoyed by all present with loud applause.
In the senior section, Guru Nanak Boys Public Inter College, Chukhuwala, was first, and Janaki Children Academy, Kargi Chowk, was second. In the junior section, the Rajkiya Inter College, Khurbura, came first and Janki Children Academy, second. Prizes were distributed to the winners and certificates to all participants.
Brig Behl said it was important for student to know about the great leaders, culture and social obligations, and how they achieved freedom for the country. He said that he had the opportunity to see the country by road and as such wished that people did the same. President of the organisation, Subhash Chandra Chhatrapati proposed the vote of thanks. KK Arora, Secretary, and Narendra Goyal, conducted the function.