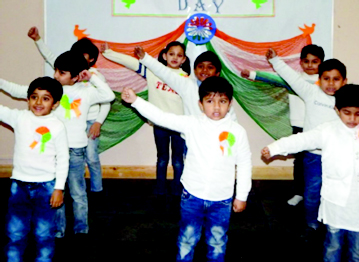 By OUR STAFF REPORTER
DEHRADUN, 26 Jan: Saluting the Free Nation and its freedom fighters, Utopia Primary School, celebrated the 70th Republic Day with patriotic zeal. The event was chaired by Headmistress Aman Segra. Present were the teachers, the Utopians and the ancillary staff.
The programme began with a prayer and Headmistress Aman unfurled the flag with pride. Everyone then sang the National Anthem. The little ones of the junior most class performed an action song, “Sab se aage honge Hindustani”. The programme was then carried forward by the Seniors, who sang and performed to “Chhodo kal ki baatien, kal ki baat purani, Hum Hindustani”. A dance to “Jai Ho” was also performed by the senior students.
The students of Step One spoke a few lines on Republic Day and ‘Our Country’. The programme concluded with Headmistress Aman Segra’s speech, in which she motivated the children and also threw some light on the roles and responsibilities of a good citizen. A student of Step One administered the pledge to the entire audience. All the children made a pledge to living in harmony and brotherhood and also carrying the rich tradition and its culture forward.
The programme concluded with the game, “Find your partners”, in which the children had to search for their partners with a balloon in any of the colours of the flag.