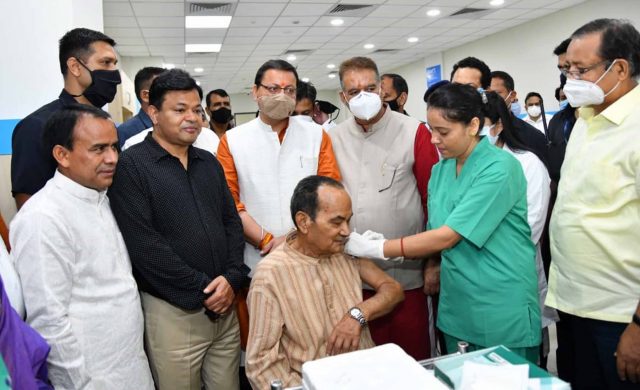 By Our Staff Reporter
Dehradun, 22 Aug: The Sputnik-V vaccination started in Uttarakhand from Dehradun today. Chief Minister Pushkar Singh Dhami inaugurated the drive at the Graphic Era Hospital, here. There is much enthusiasm among people to get the Sputnik-V jab. As soon as it was announced, last night, there was a rush to book the vaccine slot on the Cowin portal, which continued till this evening.
Chief Minister Pushkar Singh Dhami handed over the first dose of the Sputnik-V vaccine to the medical staff after reaching the Graphic Era Institute of Medical Sciences in Dhulkot (Vikasnagar) this morning. Along with launching the vaccination, he took stock of the arrangements made for emergency response in the hospital and also monitored the hi-tech system of storing Sputnik-V and monitoring it.
He said on the occasion that saving lives is the most important thing. Therefore, despite canceling all the programmes because of the state mourning announced because of the former UP CM Kalyan Singh’s demise, he did not postpone the vaccination programme.
Dhami expressed satisfaction that COVID vaccination is happening at a fast pace in the state. By the month of December, this year, 100% vaccination would be done in the state, for which it is getting full support from the central government. So far, this month, the state had received 17 lakh vaccines from the Centre.
The Chief Minister added that camps are being organised in remote areas of the state for widespread vaccination. The state government has made full preparations in view of the possibility of a third wave of Covid. Continuous efforts are being made to further strengthen the health facilities in the state.
Health and Higher Education Minister Dr Dhan Singh Rawat appreciated the introduction of Sputnik-V vaccine for the general public after Covishield in Graphic Era Hospital. He reminded that Bageshwar district had become the first district to vaccinate all its residents, as had Khirsu Block in Pauri District.
Congratulating President, Graphic Era Educational Group, Dr Kamal Ghanshala, for introducing Sputnik-V vaccine in Uttarakhand, Cabinet Minister Ganesh Joshi said that the state-of-art technologies available in Graphic Era Hospital should benefit the common people.
Chief Minister Pushkar Singh Dhami, Health Minister Dr Dhan Singh Rawat, Sainik Welfare Minister Ganesh Joshi and MLA Sahdev Singh Pundir were the first to reach the hospital of Graphic Era Institute of Medical Sciences in Dhulkot.
Expressing grief at the death of veteran BJP leader, Kalyan Singh, who was the Chief Minister of UP, tributes were paid to him by observing a few moments of silence. Because of this, all programmes organised at the vaccination site were cancelled. The Chief Patron of Graphic Era Group, RC Ghanshala, took the first shot.
Dr Kamal Ghanshala told the Chief Minister that the 750-bed hospital in Dhulkot would start functioning at its full capacity in a few months. First of all, wards with ventilators and Bi-PAP beds had been prepared keeping in view the possibility of emergency situations. The latest technology is being adopted to provide the best medical facilities by connecting expert doctors and skilled staff.
Dr Ajay Patel, Principal Medical Officer, Graphic Era Hospital, said the Sputnik-V vaccine has been declared effective against corona up to 95 percent. In the case of the Delta variant, the vaccine is considered to be about 83 percent successful. The introduction of Sputnik-V vaccine has started from Dehradun in Uttarakhand from today. After registration on the Cowin app, any person can get the Sputnik-V vaccine at Graphic Era Hospital at a fee fixed by the government.
Member of Graphic Era Educational Society, Dr Satish Ghanshala, Chancellor, Graphic Era Deemed University, Dr RC Joshi, Vice Chancellor Graphic Era Deemed University Dr Rakesh Kumar Sharma, Dr Sanjay Jasola, Graphic Era Hill University, Pro-VC Graphic Era Hill University, Dr Jyoti Chhabra, Dr Manoj Gupta, Advisor and doctor at the hospital, Dr Nalin Bhatia, Director (Infra) Dr Subhash Gupta and many other officials were present on the occasion.