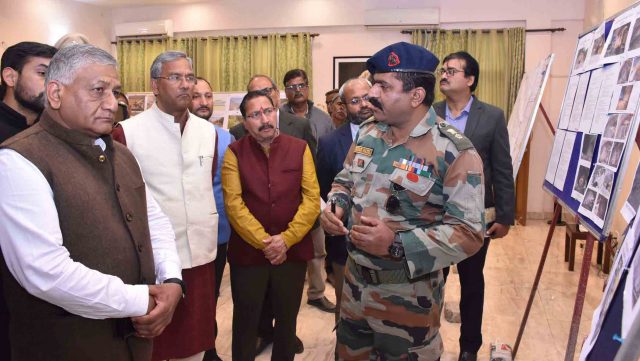 DEHRADUN, 20 Feb: Chief Minister Trivendra Singh Rawat and Union MoS, Road Transport, General VK Singh (Retd) undertook an aerial inspection of ongoing work on the Char Dham Project on Thursday. They observed developments at Chinyalisaur, Dharasu, Jankichatti, Badkot and Bhaironghati. Following this, they held a meeting at the ITBP camp in Matli with officials regarding progress on the project. Presenting the report on the work underway in the district, DM Dr Ashish Chauhan said that progress was on schedule. The CM and the MoS were shown photographs of the tunneling work at Silkyara. They were also briefed in detail by the BRO, National Highway and NHIDCL authorities. General VK Singh directed that the work on the Char Dham Project be completed before the 2021 Kumbh Mela in Haridwar. This would prove greatly convenient for the Char Dham pilgrims. He told the officials to ensure water drainage in the Silkyara Tunnel be ensured. Treatment of the unstable slopes along the roads was also advised. The Char Dham Yatra had to be made as smooth and hazard free as possible. Chief Minister Rawat expressed confidence that the project would be completed soon, which would provide comfortable travel to the domestic and international tourists. According to him, the NGT High Power Committee had submitted its final report and action taken soon so that the all weather roads could be constructed. Present on the occasion were Gangotri MLA Gopal Singh Rawat, district level officials, ITBP Commandant Pawan Kumar and Major Avnish Sharma.

Garhwal Post has established itself as a credible, balanced and forward looking newspaper in India. Based in Uttarakhand, the daily is read by the aware, socially and culturally responsible, high-income elite of society.
Contact us: info@garhwalpost.in
sligo meetup trans single hook up for camping